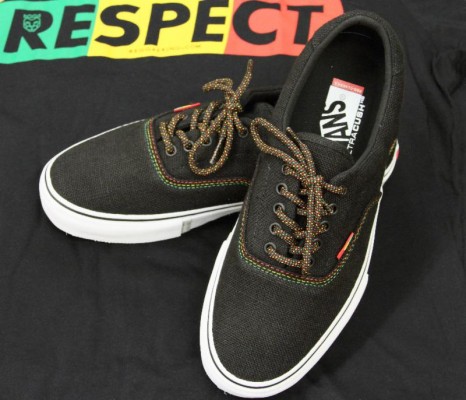 Vans joins forces with reggae powerhouse VP Records to release an exclusive Dub Rockers shoe to celebrate the launch of Dub Rockers Volume 1, a groundbreaking compilation that combines Jamaica’s top artists with popular U.S. and Euro-based reggae acts. The 10-track musical collection features collaborations between Slightly Stoopid, Inner Circle & Capleton, Bad Brains & Angelo Moore of Fishbone, SOJA & Gentleman, Rebelution & I-Wayne and much more. For a limited time, the album is on sale for only $5.99 until Feb 11th, 2014 via iTunes.

Only 120 pairs were produced by Vans. The shoes will not be available in stores, so a number of giveaways are scheduled to take place on Dub Rockers Facebook and Twitter.

Hip hop icon Redman and Angelo Moore of Fishbone were recently presented with a pair of the exclusive kicks at Raised Fist Propaganda’s Dub Rockers event at Le Poisson Rouge on December 14, 2013. Watch an exclusive clip from the show featuring Angelo singing praises about his new Vans.

Skateboard legend John Cardiel says he is “stoked to be able to step forward in the right direction with these Vans shoes and the Dub Rockers music collection.” Cardiel aka DJ Juan Love has a unique connection with reggae music and recently hosted the Dub Rockers Mixtape Vol. 1, which is an extension of the compilation.

TERRY LINEN RETURNS WITH HIS SOPHOMORE ALBUM WELCOME TO MY WORLD ›