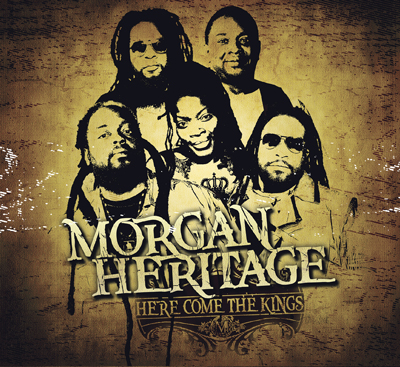 Last week, Morgan Heritage appeared on Miami’s premier entertainment TV program Deco Drive to discuss the group’s long-awaited return and new video for the album’s first single “Perfect Love Song.” Deco Drive, which airs every weeknight on FOX’s Channel 7, raved that the group “has been bringing Jamaica to the world for two decades” and “if the Marleys are the first family of Reggae music, then Morgan Heritage is a very close second.”

In support of the new album, Morgan Heritage will meet and greet fans on June 15 at VP Records Florida retail store in Miramar and then head to Europe at the end of June for a one-month tour spanning the Netherlands, Belgium, Germany, Austria, France, England, Switzerland and Italy. U.S tour dates will be announced shortly. Now being dubbed as the “Rolling Stones of Reggae” (in large part due to the act’s electric stage shows), Morgan Heritage has established themselves as the premier live group on the reggae circuit. Please click here for their most up-to-date schedule.

×
Update Required To play the media you will need to either update your browser to a recent version or update your Flash plugin.
VP Recordsalbum, here come the kings, morgan heritage, reggae, Shaggy, VP