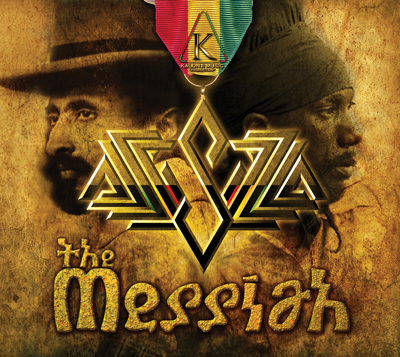 One of reggae’s most prolific artists Sizzla returns with his 70th album The Messiah on May 28th (Kalonji Music/VP Records). Since his emergence in 1995, the enigmatic vocalist has undeniably put his stamp on the genre regardless of the current style or trend. His latest effort showcases his musical depth, passion and precision in partnership with Bread Back productions.

Mostly written and executive produced by Sizzla himself, Kalonji’s full scope of talents are displayed on The Messiah. With a fresh perspective in 2013, the man on a musical mission inspires positive change worldwide on this 15-track collection. His social commentary on songs like “Chant Dem Down,” “No Wicked Man” and “Psalms 121” reveal his daring bravado and righteous lyrics, while his melodic anthem “Good Love” unveils his softer side.

The buzz around this release has already been circulating his native island. Sizzla recently told the Jamaica Gleaner this “spiritual conscious album” compares to his early classic Black Woman & Child, released in 1997 on VP Records. He also told the Jamaica Observer why he makes music like this compelling collection. Sizzla proclaims “I do music to free the people, unite the world, heal the children.”

×
Update Required To play the media you will need to either update your browser to a recent version or update your Flash plugin.
VP Recordsalbum, kalonji, new, reggae, sizzla, the messiah