The Legendary and Iconic Saxon Sound 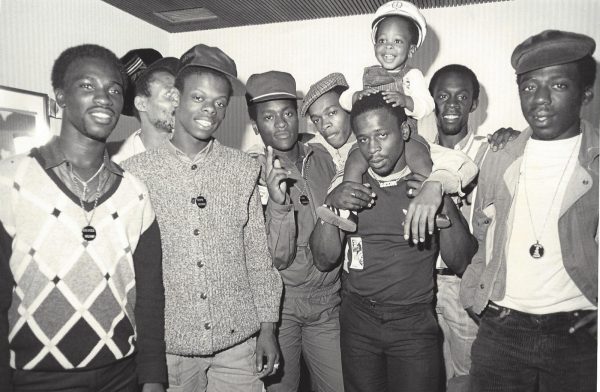 The sound came to prominence in the early ’80s because of the “fast chat” style which was pioneered by its deejay Peter King. Other Saxon MCs included Tippa Irie, Smiley Culture, Asher Senator, Papa Levi, Daddy Colonel, Daddy Rusty and Daddy Sandy, each of whom developed this style and went on to release records, some achieving Top 40 hits in the UK national chart.

VP: Can you please introduce yourself and let us know who the original members of Saxon Sound were?

SS:  Saxon Sound started in 1976 with myself, Lloyd Francis, and Dennis Rowe aka ‘Musclehead’ and ‘D Rowe’. Singers and DJs at the time were Maxi Priest, Papa Levi, Ranking Coaly, Mellow, Peter King, Kojack, Phillip Levi, Roger Robin and many more followed after but they were the first set of people that were on the sound.

VP: Saxon Sound dominated in the 80’s & early 90’s, what do you think it was that made the Sound so popular?

SS:  When we used to play out back in them times we used to play at house parties / Blues dances and it eventually grew into playing in clubs and town halls. I think we got popular because of the entertainers we had around us, I think we had something really special at the time. We had people like Tippa Irie joining us, Daddy Sandy, Senior Sandy, Daddy Colonel, Sugar Merchant Neville Morrison – many entertainers came on the sound. Anywhere we went we had the crowd because they would come out to listen as we were really special at the time, without us even knowing. Later we had Smiley Culture & Asher Senator, anywhere we went we smashed it!

Also we had the music and that definitely had a big impact because we was playing some exclusive tunes, a lot of Studio One tunes that other sounds weren’t playing and when the entertainers jumped on it it was a vibe. We played everything, Soul, Calypso, everything at the time, a lot of Lovers Rock, we just played the best music. We played lots of Dubs as well, Shaka inspired us to build the sound so we ran a lot of Roots too.

VP: The role of ’The Soundsystem’  is historically very significant in Black British culture in the U.K, how do you feel ’Soundsystem Culture’ has influenced the mainstream?

SS:  Back in the day, we was playing out we influenced a lot of people from England to Jamaica to America, all over the world. We would have tapes going out every single week so people were listening to what our DJs were spitting out on the mic, a lot of rappers from America were listening to our tapes. That’s why Greensleeves and Island signed us up because we were bringing something to the table that all the other sounds didn’t have, we were ahead of our time. Even to this day, you can hear the lyrics, style and pattern of say Tippa, Levi and the rest of the Saxon crew in a lot of new artists.

We didn’t have so many people on the radio back in the day, so we was the radio station, plugging the music. If you wanted to hear the latest thing, you had to come to wherever a Soundsystem was playing. There was only Steve Barnard, Rodigan, Tony Williams and a few DJs at the time, who had limited access to tunes whereas we had the tunes that weren’t really getting promoted, we had the ears for the people.

VP: Greensleeves Records celebrates its 45th anniversary this year and has released a wealth of music from across the Reggae & Dancehall universe. Can you tell us about your favourite release from the Greensleeves catalogue?

SS:  There was just so many, I especially like the Junjo Lawes selections, those riddims I like a lot. Too difficult to choose just one. Greensleeves had a lot of great tunes.

VP:  Please tell us about any upcoming projects / events that Saxon Sound has planned.

SS:  Every single Saturday we play at Boisdale in Canary Wharf, we play from 6:30-2am plus I’m working with bookings all over the place. Australia next year is happening, Bermuda, a few bits coming up. Make sure you are following the social media pages for the latest info. The modern-day version of Saxon Sound is myself, Musclehead, Allan Brando and my son Sean Muscle. Next year we’re going to start up the Saxon Sound label again and put some of our older material back out again also so you can keep a look out for that.

Stream the U.K. Style – Made In England Playlist