Peer to Peer with Raul Dunkley 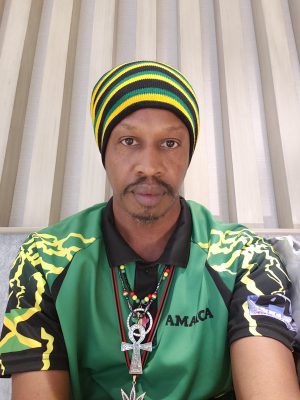 RD:  I initially started doing illustrations/screen printing for various clients at age eight (8) and those skills quickly upgraded/matured to designs and multimedia projects incessantly over the years. I eventually went on to produce art as a business while juggling/doing my secondary level education of which I had a successful pass (Grade 1) in the ordinary level CXC examinations upon leaving St. Jago High School, 1994, in my 5th year. I was accepted that same year underage at 15+ while the required age was 17 and up to enter the premier creative training institution of the Edna Manley College of The Visual and Performing Arts.

I produced lots of T-Shirt designs for several clients during my tertiary level education and from the monetary gains I could cover easily my expenses and equipment, art supply needs necessary. I eventually stopped after my third year and went on to work on lots of project in the industry applying my varying creative disciplines. I was lucky in my early years, age 7 to 15+, to be guided and mentored by Mr. Winston Pedley a professional artist in his own right, who operates a studio and is also an educator spanning 4 decades at the Spanish Town Comprehensive High School to current.

RD:  I designed the compilation album “Trod’in To Zion” LP, CD, Poster and other promotional marketing visuals in 2001 and later that year it went on to become the album of the year, with a single of the year as well. That said year I designed the Lion Paw Music Production logo and 45 music label on which its first song was published, “Virtuous Woman” by Warrior King that went on to become number one song for several weeks on various charts, radio playlists, locally, internationally, and is now a reggae music love song anthem.

The “Trod’in To Zion” album executive producers were Michael ‘Mikey John’ Johnson and Ian ‘Wayne’ Williams.  The year 2002 while I was still working in the editorial department at the Gleaner Company Ltd., I was interviewed by the Gleaner’s entertainment writer Leighton Williams, the published article was titled; Graphic Artist Have Reggae Covered, Sunday, January 27, 2002. This article further highlighted the album, the many hit tracks and dived deeper into the concept/planning, designing & layout, packaging of the music projects and explored the value of doing graphic designs for such projects which was to give and overview of how lucrative the entertainment business is from the creative’s visual & multimedia services which completes the look development, shelf visibility and appeal for fans, customers.

RD:  I have had many points of successful breaks due to multidisciplinary creative titles. I would answer by saying my initial breakthrough came when I was 16+ years old. I was professionally contracted as an editorial cartoonist and graphic artist for the Jamaica Star’s Tabloid editorial page of which I draw social commentary illustrations daily, Mondays to Friday’s. Designed and illustrated The Thursday Star cover weekly, the public would look forward to getting a copy. I also Illustrated various graphics and cartoons for the Jamaica Gleaner Newspaper, its insert tabloid The Flair. The Sunday Gleaner plus its insert tabloid called the Outlook Magazine which would have various stories I produced an illustration for each week. I was the youngest to date to have ever held that position in its 188+ year history.

RD:  We recently completed a successful 4 Tier NFT drop for Hip Artist Jim Jones in March 2022, which came out under the banner “Digital Money”. The collection built around Jim Jones is launched exclusively on the Mogul NFT marketplace. Included in those featured items are the chance to own the world’s first crypto song as an NFT. I was the finisher for this project and the team of four (4) artists who collaborated/worked on this project were, Suliman Onque (USA), Jay Golding (USA/Mexico), Tokenoma (Canada) and myself Raul Dunkley (Jamaica).

Currently I am also working on a 4 Teir NFT drop for Do-It-All – Hip Hop Artist Dupre Kelly, who is currently running for Councilman in Newark, New Jersy. This is a collaboration project with three (3) American artists, Suliman Onque, Yvonne Onque, Samad Onque, including myself Raul Dunkley of which I am the finisher of the deliverables to be released by the third week of May 2022.

I am in the early develop process of 3D feature short film animation pilot which directly focused on the Jamaican and Caribbean culture to be marketed globally in a fun filled package of episodes exploring the world and unique vibration of the main character/hero of this project. I will keep it limited regarding this, which is one many IP (intellectual property) productions I intend to release in this current decade.

RD:  Lol! I am currently so out of tune with these apps… Lol! I have yet to explore these platforms for music and I promise soonest.

I must say though! I have a heavy world collection of music in LP, 45 vinyl records, CDs and digital softcopy purchases over the last 3 decades. Most of the last decade I have amassed an extended collection of incoming music genre submissions from all over the world even to current. Why? I was an online Disc Jockey with the title, DJ Cosmic One!. I played for two (2) online radio stations for several years. This was from 2012 to first quarter 2019 before I eased off air to fully refocus on the visual arts.

‹ Peer to Peer with Jermaine McCalpin

Congratulations to Shaggy on His Honorary Doctorate ›