Peer to Peer with Kevoy Burton 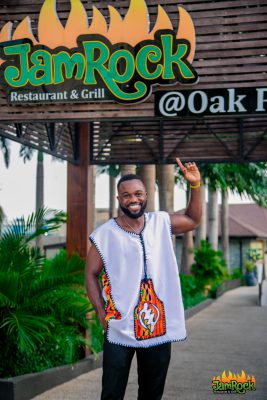 Ghana based Jamaican TV star, actor and restaurant co-owner, Kevoy Burton makes sure that Jamaican cuisine is front and center in Ghana.  A popular hotspot with locals and visitors to Ghana, Mark /Wilberforce we caught up with Kevoy to talk about Jamaican cuisine in Ghana on behalf of VP Records.

MW: Tell us a bit about your background for those who aren’t familiar with you.

KB: Well, I grew up in Spanish Town, Jamaica and went to St Catherine basic school. And then I went to Arden High school which is in Kingston. It’s one of the top schools, so I had a little sense (lol) and then went to NCU which is Northern Caribbean University in Mandeville. But, I didn’t finish because I had children.

I started acting when I was in sixth form. I was about eighteen years old. And I starred in my first movie which is a film called ‘Ghetto Life’.  Since then, it’s been like from strength to strength in Jamaica. I became a TV personality. I’ve done more movies. I’ve done series. I’ve done commercials. I’ve done everything, ya know!

MW:  Is there any one particular moment during your time in Bucktown that stood out the most to you?

KB:  I can remember two specific things always. There was one night where a guy was sitting outside a set-up. I don’t know of you know what a set-up is?

MW: (I shook my head with a puzzled look)

KB:  A “set-up” is like a nine night (after the death of a person you have a celebration of their life at the point at which their spirit traditionally leaves the body). And there was a guy sitting by there and some guys just drove up and shot him in his face twenty-two times. He didn’t have a face by the time they had finished shooting. This happened in front of everybody. In front of him parents, coz it was a big celebration. And I also remember one time, I came off the bus from school in Spanish Town, turned a corner and there was a guy off his bicycle, shot, out in the street. I think I was about fourteen or so when I saw that.

MW:  What impact did those incidents have on you?

MW:  What kind of student were you at school.

KB:  (Huge laughs) I’m the student who knows I can pass and just pass.

MW:  How did you secure the role of ‘Ghetto Life’?

KB:  When I was seventeen. I just joined a drama club. I was doing cricket but, I was very undisciplined. I was kicked out of cricket because I didn’t go to training. So, I said I need something else to do and then I went to join a drama club through the recommendation of a friend. About three months in I got an advertisement. The producer of the advert happened to be the future producer of ‘Ghetto Life’. And she always tells me this, when she saw me, she called the guy who wrote ‘Ghetto Life’ and said “we’ve found your lead (character). So, they gave me that role and then I became a movie star.

MW:  What TV or Movie work do you think you’re most known for?

KB:  Internationally, Ghetto life – even when I came to Ghana, some young boys in Cape Coast (Central region of Ghana) recognised me from Ghetto Life. In terms of local, I did a TV series called “Real Friends”. And when I say that series was popular in Jamaica, I mean it was.

MW:  Switching over to a bit of music now, whose your favourite Reggae-Dancehall artist and why?

KB:  Wow!  That’s difficult … I have a few, still. I like Agent Sasco. He has a very positive vibe. Alkaline. I went to school with that guy but he was two years my junior.  In terms of older hits, I like Mavado, Vybz Kartel has to be in the mix and Chronixx.

MW:  What was he like (Alkaline) as a student?

KB:  He was unruly my bredda but, you could tell he was a very smart boy.

MW:   Based on what you’ve seen and heard out here, which Reggae-Dancehall artists do you think Ghanaians gravitate to the most?

MW:   What inspired you to leave Jamaica to live in Ghana?

KB:  I’m a dream chaser.  When I came to Ghana my first instinct was to come back and see if I like it here.  When I saw this place I said to myself if I can dedicate ‘x’ amount of years of my life to this cause, I think it can work. And, if it doesn’t work I can just go back to Jamaica.

I’ve dedicated ‘x’ amount of years of my life to try and achieve a particular thing in Ghana. And I won’t stop until it happens. From what I’ve seen, Ghana has a lot of deficit but, they do not lack human resources, or natural resources, in fact they do not lack any type of resource. So, everything is here, it’s just the exposure to the opportunities that’s not here. A lot of people don’t understand that there are opportunities. So, for me I wanna be one of the pioneers who invites people from the diaspora, or even take ghetto youths from Jamaica, who have potential and bring them here so that they can expend themselves as well. That’s the aim!

MW:  What would you say to people who may think, why don’t you use that potential money and resources and do such reform programmes in Jamaica instead of Ghana?

KB:  When I came here (Ghana) the owners of Jamrock, where we are now, they brushed me up and showed me how to operate as well as how business works in Ghana. So, they sort of refined me in a way.  And it’s outside of your regular environment that you grow up in, where you don’t have distractions or influences that can draw you back.

MW:  Take as through a “day in the life of a co-owner of a Jamaican restaurant in Ghana?

KB:  A typical day for me involves coming here (Jamrock Restaurant) observing. I’m a branding person so, I make sure all the food and premises looks nice on social media. It’s a very chilled and tropical vibe here at Jamrock, with the pool to our right and surrounded by palm trees. Elizabeth does operations and Kadeem does the kitchen and Raphael does all the behind the scenes work. It’s a great team.

MW:  And what does Jamrock represent as a brand and service?

KB:   Jamrock is the definition of culture … It’s a good question actually. Jamrock represents the future for the diaspora, the future of Jamaican people looking to Africa in order to create something for themselves. As far as I know, Jamrock is the biggest Jamaican brand in West Africa. It’s very much a cultural hub. The likes of Steel Pulse have come through and performed – so it really represents the future for Diasporians and Jamaicans alike.