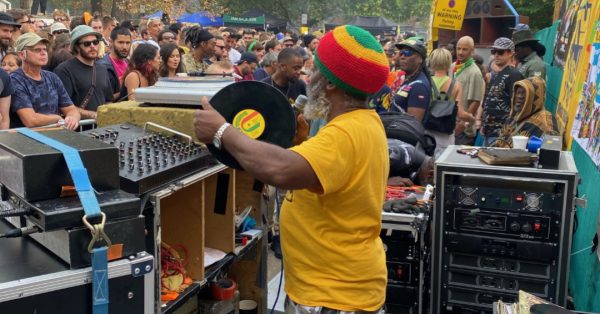 Notting Hill Carnival returned triumphantly to the streets of London last weekend for the first time in two years.  Greensleeves held an exclusive rooftop party at Soho House White City for a night of Reggae, Dancehall and Carnival Anthems. Special guest selections came from the amazing Ayanna Heaven and also U.K. Grime legend Footsie who had the crowd moving with one away dubplates and revival gems. The Greensleeves Hi-Fi team (Oxman and Adam Prescott) played a scorcher of a set packed full of top-ranking music from the Greensleeves catalogue and beyond.

On Sunday there was a moment of silence observed by the Carnival faithful to remember the Grenfell Tower victims and commemorate the five-year anniversary of the tragedy. A fitting tribute was held at Channel One Soundsystem, one of the heaviest Roots & Dub outfits in the world. Afterwards Channel One performed a special one-off Greensleeves Records showcase in which the great selector Mikey Dread drew for a hardcore sequence of vinyl from the Greensleeves archive, all of which was played on his own custom hand-built Sound to rapturous applause.

Throughout Carnival, Greensleeves has reminisced on their historic contribution to the sounds of Reggae in the UK.  The 45th anniversary campaign champions the labels iconic albums which fans and lovers of the genre can see via street posters and digital signage around Notting Hill as well as a huge billboard right in the heart of Carnival on Ladbroke Grove.  ‘We Paved The Streets With Reggae’ was the caption used by the team at Greensleeves for their marketing and the phrase has been echoed over social media with many fans sending in their snaps of the billboard and expressing their love for the label.

Day two of Carnival weekend, VP and Shabba Party turned up the heat by holding an epic Carnival after-party at Soho House White City. The hottest ticket in town and attendance from a who’s who of London’s music scene. Ravers were tuned in to the sound of visitors from New York’s Ayanna Heaven and Liondub plus the U.K’s very own Navigator and Ras Kwame plus many more. To really spice things up VP and Shabba Party brought in a top secret special guest headliner to surprise the party-goers, step forward the one and only Protoje!  He performed some of his biggest hits including the anthem ‘Who Knows’ to a jubilant crowd.

‹ Peer to Peer with Yng Cptn