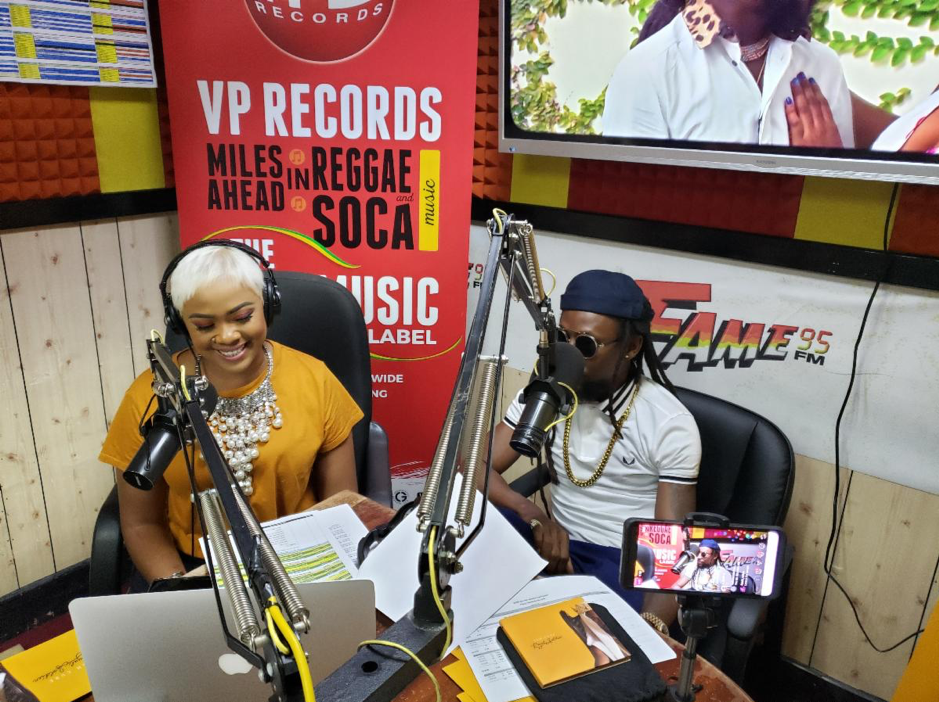 To celebrate the release of Jah Cure’s Royal Soldier, Jah Cure appeared on Fame 95FM on Thursday September 5th with VP Records for a two-hour live radio album conference, hosted by Collin Hines and Debbie Bissoon. Jah Cure was onsite to answer questions and provide insight on the production and concepts behind the album. Vibes FM in Gambia, Dub Master Chris on Irie Jam 93.5FM in New York, Bajan King on Reggae King Radio in New York, Rico Vibes on Daflava Radio in Atlanta and Papa Richie on Chou 89.1FM in Ottawa, Canada all live streamed the event to provide international coverage to fans globally. The radio conference showcased Jah Cure’s work, playing his entire album from start to finish and featured discussions by Jah Cure, the hosts and guests. He enlightened listeners on the three-year long production that went into creating the body of work, with producer Llamar ‘Riff Raff’ Brown calling in to speak on the engineering processes behind ‘Work It Out’ and ‘Only You’. He also explained how certain features came about, highlighting his pride in being able to work with reggae legends, such as Yami Bolo, Junior Reid and Capleton to create the timeless track ‘Street Kings’.  Listeners also heard from the DJ’s who were live streaming the event, where they shared their opinions on particular songs and their home cities reception to the album. Jah Cure gave a personal touch to the interview, sharing his interest in cooking with his fans and his deep love for the Bahamas and their residents; a love so deep it pushed him to feature local artists, such as Alx and Dru, on his album. The love and positive energy that is at the foundations of every album he creates was present throughout the interview. He recalled comical stories of his first introduction with featuring artist Tory Lanez and his happiness at playing a key role in the success of once-fan and now featuring artist Phyllisia Ross. He hinted at concepts for his next album, promising fans that he would ensure the rhythmic and conscious nature of his music would remain. Singer-songwriter, Mya, also phoned in to voice her happiness with having the opportunity to collaborate with reggae veteran, Jah Cure. They also mentioned the upcoming ‘Only You’ music video that fans should be on the lookout for. Royal Soldier was released on August 30th, 2019 worldwide and reached No. 1 on Billboard Reggae charts, also securing top three positions within Belgian, French and UK charts. In Royal Soldier, Cure writes songs about love and consciousness and reality. Cure’s presence and influence among Caribbean fans has reverberated around the globe and earned him top status among reggae artists internationally.Singles off the album include “Telephone Love”, “Risk It All”, “Life is Real”, “Marijuana” and most recently “Pretty Face”. Guest appearances on Royal Soldier include Melanie Fiona, Mya, Phyllisia Ross, Popcaan, Damian ‘Jr. Gong’ Marley, Tory Lanez, Capleton, Yami Bolo, and Junior Reid.“I always have something good up my sleeve and I try to take time and put real love into it,” Jah Cure explains. “It’s like cooking food. It has to be balanced. It has to be right. Anybody can cook food to fill your stomach but it isn’t everybody who can put that love into it.”