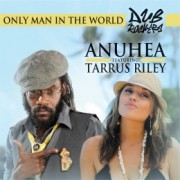 Hawaiian singer-songwriter Anuhea teams up with Jamaican vocalist Tarrus Riley on the new single “Only Man In The World,” out now on VP Records and WorldSound.  The digital and 7″ vinyl release also includes an acoustic mix of this sultry duet written by Maui’s rising star.

The song debuts this week at #6 on Billboard’s World Music chart and peaked at #4 on the iTunes Reggae Chart – making this VP Records’ best-selling first week for a single since Gyptian’s “Hold You.”

“Only Man In The World” is the first title from Dub Rockers, a new compilation that will showcase Jamaica’s top artists (Etana, Morgan Heritage, I Wayne) with the latest wave of reggae-influenced musicians based primarily in the United States (Slightly Stoopid, Rebelution, Bad Brains, SOJA).

Anuhea, born in December 1985, is widely known for blending reggae into her soulful pop and acoustic island-flavored rhythms. The self-taught guitarist and songwriter’s 2009 self-titled debut album shot to #7 on the iTunes Pop Charts, #4 on R&B and #3 on the World/Reggae Billboard Charts. Multiple singles became commercial successes on Hawaii and AAA national radio. Her latest album For Love continues to be a top seller in United States, particularly Hawaii and the West Coast.  She has shared the stage with artists like Bruno Mars, Babyface, Al Green, FloRida, Hoobastank and Pepper, but this is the first time she has teamed with a Jamaican reggae artist on a record.