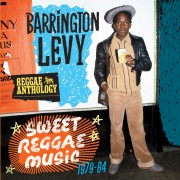 17 North Parade, VP Records vintage imprint, digs through its vault to reveal their latest Reggae Anthology: Barrington Levy “Sweet Reggae Music” (1979-84) on December 18, 2012.  Filled with certified classics from beginning to end, this 40-track double disc collection covers the early years of Barrington Levy’s astonishing career in chronological order. In addition to this timeless musical selection, the set’s liner notes give an in-depth look of the living legend’s journey throughout this crucial period.

The first portion of the anthology runs through Barrington Levy’s breakout hits (“Ah Yah We Deh,” “Collie Weed” and “Looking My Love”) and key recordings off his 1979 debut album Bounty Hunter (recorded at Kingston’s legendary Channel One and King Tubby’s Waterhouse studio) and his Englishman LP (recorded in England by Greensleeves Records). The set delves into a definitive time in Barrington’s career when he worked primarily with record producer ‘Junjo’ Lawes and the Roots Radics band. Barrington’s powerful sound matched with the Roots Radics’ dancehall style of rhythms moved reggae in a fresh direction, and they continued to crank out hit after hit.

The second disc continues to highlight his later hits with Junjo, including “21 Girls Salute” and “Prison Oval Rock,” along with his mega crossover anthems with other producers, including “Black Roses” with Hyman Wright & Percy Chin (recorded at Channel One) and “Under Mi Sensi” and “Here I Come” with Paul “Jah Screw” Love (released on Screw’s One Time Label in UK and Thunderbolt in Jamaica).  The latter hit climbed the UK’s Top 50 Chart and has recently been featured on Saints Row 2 and Grand Theft Auto San Andreas. His international appeal also earned him Best Vocalist Award at the 1984 UK Reggae Awards.

Barrington’s career continues to flourish. His music has arguably been sampled more than any other Jamaican artist, and he has collaborated with hip hop luminaries like Snoop Dog, Busta Rhymes and Lil Wayne. This all inclusive collection not only shows off Barrington’s striking bravado and versatility as both a talented dancehall and roots & culture artist, but proves why the prolific Clarendon-born storyteller is still one of the most sought out Jamaican artists today.

×
Update Required To play the media you will need to either update your browser to a recent version or update your Flash plugin.
VP Recordsanthology, barrington, levy, reggae, roots radics, volcano