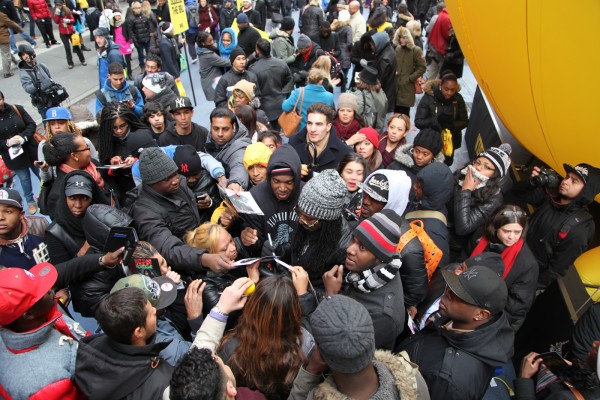 Despite New York City’s frigid air Tuesday, reggae star Gyptian brought his warm island vibes to toast up the Times Square crowd. On Broadway between 45th and 46th Street, the Jamaica Tourist Board brought a slice of the island’s culture to promote the launch of their new campaign Jamaica Get All Right. Free trips to Jamaica, travel gift certificates and mini stress balls were given away to the crowd throughout the day. The all day outdoor extravaganza featured the world’s largest stress ball (declared true by Record Setters), a live DJ set by Irie Jam and an explosive performance by Gyptian.

Gyptian hit the stage at noon and again at 4pm, reeling in on-lookers with crowd-pleasers like “Nah Let Go,” his gold-selling anthem “Hold You” and new material off his latest album Sex, Love and Reggae (Oct 29, VP Records), which debuted at #1 on the Billboard Reggae Album chart. A mob of fans immediately swarmed the artist for autographs after his set. Then, he joined in on the rest of the festivities, even squeezing the stress ball along with103 other people to break the world record for having the most hands on a ball at once.

For more information on Jamaica Get All Right go to www.visitjamaica.com.