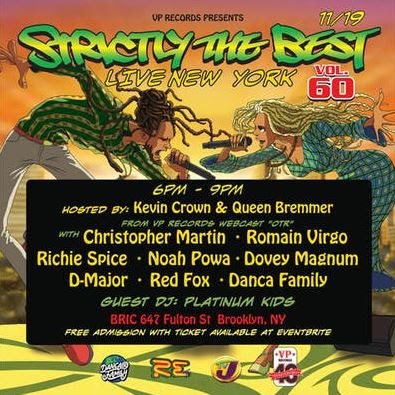 Ahead of its release today, VP Records celebrated the 60th edition of one of the label’s staple compilation brands, Strictly The Best, with a live show broadcast this past Tuesday, November 19th from BRIC in Brooklyn, New York. This history making event was the first time that a broadcast has ever been done from New York and broadcasted back to Jamaica live on RETV and VP Records YouTube channel.

The event was hosted by On The Riddim’s Kevin Crown and Queen Bremmer who filmed the season finale at BRIC earlier that day from 1-4pm. On The Riddim (OTR), is VP Records YouTube show which launched in June and has garnered over 20,000 views collectively so far. The pre-show for RETV was hosted by Jamaican media personality Debbie Bissoon.

STB 60 combines two discs of hits in one package that includes current and breaking hits from some of the top artists in roots reggae and dancehall. Disc 1 consists of reggae and lovers rock tracks. Featured tracks on the disc include “General” by Christopher Martin and “Together we Stand” by Richie Spice. The powerful anthem tells a story of being united in a time when division is more prevalent than ever. Exclusives on the album include a remake of Lorna Bennet’s “Breakfast in Bed” by former Voice winner Tessanne Chin and “Lost My Heart” by emerging solo reggae artist, Kumar Bent.

Disc 2 features dancehall tracks. Stand-outs include “One Way” by Vybz Kartel and “Glow” by Romain Virgo and Christopher Martin. The music video for “Glow” has recently amassed over 628K views on YouTube. Another exclusive to STB 60 is “No Stress” by Noah Powa who has been making waves in New York City and beyond with recent interviews on Breakfast Club, Lip Service and an appearance on Angela Yee Day.

Every year, the Strictly The Best compilation, delivers original illustrated cover art that is as dynamic as the music. STB 60 features an illustration by Japanese artist Murasaki, inspired by the scenery of the VP Records 40th Anniversary Concert held at Summer Stage in Central Park, New York in August. View a video of the artist creating the live painting at the event here.

Strictly The Best highlights top hits and breaking songs in dancehall and reggae. Launched in 1990 and leading off with Foxy Brown’s “Sorry (Baby Can I Hold You),” in recent years, alternate editions have focused on reggae and dancehall, respectively. The series exploded in popularity in its early years, featuring four editions in both 1992 and 1993. Inclusion on the set has been a coveted first step for emerging artists and a point of pride for established performers. The artists with the most songs included on the series are Beres Hammond, Beenie Man, Sanchez, and Mr. Vegas. The artist with the most Strictly The Best appearances: Beres Hammond with 26. More than 350 artists have been featured on the series to date.

“As our 40th anniversary year winds down, we are happy to release Strictly The Best 60,” said Richard Lue, Director of Business Development and Project Manager for the label. “Everything from the tracks, to the cover of the album by Murasaki, to the event coming up in Brooklyn, is aligned perfectly to celebrate the 60th edition of one of VP’s staple compilations,” he concluded.