Peer to Peer with Fredi Nwaka 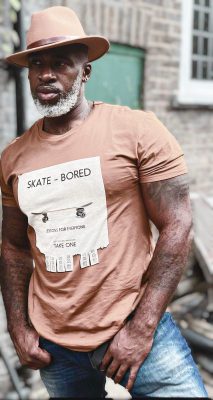 Fredi Nwaka is an award-winning writer, producer and film director from the UK. He is also a motivational speaker, mentor and advocate for men’s health pushing his brand H.E.A.L (How emotions affect life).  Not just working behind the camera he is also a well recognised actor and has starred alongside the likes of Curtis ‘50 CENT’ Jackson, Noel Clarke, Brenda Blethen, Ashley Walters, and Tom Hardy just to name a few.

VP:  How did you get started in the entertainment industry?
FN:  I started as a reggae artist on local soundsystems and became well known especially at Carnival (Nottinghill).  I then started rapping, becoming the only UK rapper to be signed to Wu Tang Clan.

VP:  Mentoring young people has been a big part of your life, what’s your advice to anyone starting out in music and film?

FN:  Always have a dream and follow it. Don’t do ‘If’s,’ only focus on how and when. Decide how you are going to do something and then decide when. Music helped me leave gang life and violent crime behind.

VP:  You recently created the Bitty McLean – Let Them Say video (out 28th October 2022) for the forthcoming We Remember Bob Andy album. What can we expect?

FN:  A heart felt tribute to a legendary singer. I tried to create something contemporary but with an easy to digest narrative. It was great working with Bitty McLean and also Singer song writer Fidel and Camilla Elliott-Proctor who star in the video.

VP:  What projects have you got coming up?

Details of all can be found on his Instagram @therealfredinwaka

Stream the U.K. Style – Made In England Playlist:

‹ Peer to Peer with Countree Hype