TOMORROW (SAT. JUN 27) TO CELEBRATE THE

WITH PERFORMANCES BY MAXI PRIEST, GYPTIAN, 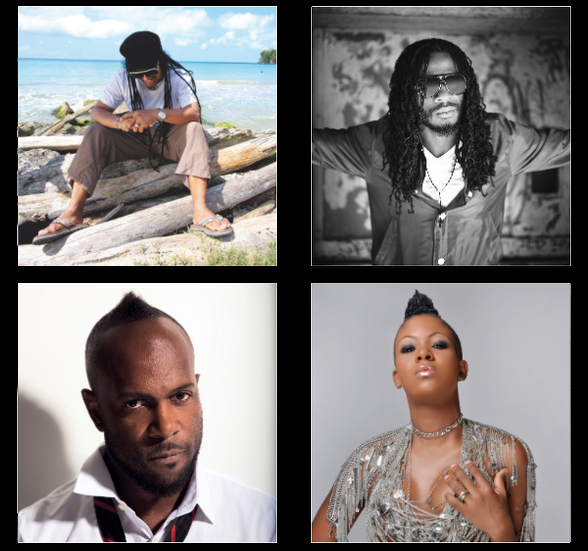 VP Records has teamed up with SummerStage to celebrate the label’s 35th year in business. From VP’s artist roster, reggae stars Maxi Priest and Gyptian as well as soca royalty Bunji Garlin and Fay Ann Lyons will take the stage in NYC’s Central Park for this momentous occasion. DJs Bobby Konders and Jabba of Massive B will also provide sounds throughout the day. The free concert kicks off at tomorrow (Sat. June 27) from 2pm-7pm.

This year marks the 35th anniversary when VP Records’ founders Vincent and his wife Patricia Chin moved their headquarters from Kingston, Jamaica to Jamaica, New York – transforming their operations into the largest Caribbean music company worldwide. There will also be a special VP Records 35th anniversary pop-up exhibit entitled A Reggae Music Journey, which designed by acclaimed artist Michael Thompson. The display will be located outside of the event for all the patrons to enjoy.

“VP Records is proud to bring this all-star lineup into the heart of Manhattan. We’re all looking forward to celebrating the 35th anniversary with an historic day of reggae and soca music in the park,” states VP Records Senior Director of Marketing Brian Greenspoon.

Following several partnerships with VP Records, The Jamaica Tourist Board joins the label again as an official sponsor for the event. They will giveaway travel and merchandise on site. JTB’s Business Development Manager Kris DaCosta says, “the VP Records and SummerStage collaboration is a great fit for us. Reggae music is a huge part of Jamaica’s storied history and this event gives us a great opportunity to share with New Yorkers the good vibes to be had on Island.”

SummerStage is also celebrating their 30th anniversary this year. SummerStage is a program of City Parks Foundation that presents performances of outstanding artistic quality, free of charge, to serve the diverse communities of New York City. To celebrate their 30th anniversary, they have extended the season from May to October, and added more than 20 free shows in Central Park and 15 neighborhood parks across the city.

VP Records co-founder Patricia Chin adds “SummerStage’s 30th Anniversary and VP Records’ 35th Anniversary are significant milestones that we are honored to acknowledge together at the prestigious Central Park venue.” After 35 years, Miss Pat (as her staff affectionately refers to her) is still very much involved with the day-to-day operations of VP Records.

Patricia Chin also received the Lifetime Achievement Award last night (June 25) at the 2015 American Association of Independent Music (A2IM) Libera Awards. She is the first female recipient to be presented with this honor.

Maxi Priest
With over 15 million albums sold worldwide, multiple Grammy nominations and Top 10 Billboard hits (including the No. 1 smash “Close To You”) – the most successful solo act in British reggae history, Maxi Priest, continues to hit the road throughout 2015 in support of his first studio album in almost a decade, Easy To Love (VP Records). Easy To Love is a fine representation of pop, reggae and R&B blended together in one set. The title track was a No. 1 hit on reggae charts last summer, evidence that Maxi Priest has a gift for staying fresh. “Hearts Across The World” is a song for our times and pleas for people of all races to love one another. The soulful “Without A Woman” features Jamaican legend Beres Hammond and even echoes the themes and intensity of James Brown’s “It’s A Man’s Man’s Man’s World.” Maxi continues to tug on women’s heartstrings with irresistible tributes of enduring affection on “Loving You Is Easy,” “Holiday” and his rendition of John Mayer’s “Gravity.”

Gyptian
Jamaican reggae singer Gyptian broke into the reggae scene in 2005 with his string of hits like “Serious Times” “Beautiful Lady” and “Mama, Don’t Cry.” He hit international stardom in 2010 with his critically-acclaimed album Hold You and its RIAA certified Gold title track (produced by Ricky Blaze), which featured a Nicki Minaj remix, and earned him a 2010 MOBO and Soul Train award. Gyptian just released his new single “All On Me” and his latest fourth studio album Sex, Love and Reggae, which peaked at #1 on the Billboard Reggae Album chart, is a marked departure from his previous releases and unveils another layer of his artistry. The musically diverse set takes the listener from dancehall to soca to global pop and R&B sounds and features an eclectic mix of production from Jamaica – including Shane C. Brown. Justus Arison and Stanley “Rellee” Hayden, Russian and Linton “TJ” White – and is co-executive produced by Jerry “Wonda” Duplessis (Miguel, Mary J. Blige, Lupe Fiasco,
the Fugees).

Bunji Garlin
Born Ian Alvarez, the Trinidadian ragga soca star Bunji Garlin is known for blending of soca with dancehall. Hailed recently by Rolling Stone as “America’s first soca star,” Garlin has clearly taken his native country’s genre to new heights. His single “Differentology (Ready For The Road),” which was remixed by Major Lazer & Busta Rhymes, was a massive hit in North America more than a year after its release in the Caribbean. In 2013, the single received a Soul Train Award win, was featured on ABC’s Grey’s Anatomy, won NYC’s HOT 97 FM’s Battle of The Beats competition and was chosen by NPR as one of the year’s favorite anthems as well as MTV Iggy’s Song of the Year. Garlin introduced soca to more mainstream music circuits by performing at last year’s SXSW, CMJ Music Festival, FADER Fort, Mad Decent Boat Party and alongside Jillionaire and Major Lazer during their 2014 tour stint. That same year, he made his national TV debut on BET’s 106 & Park to perform “Differentology” and returned for their Carnival takeover episode with Fay Ann Lyons and A$AP Ferg for their “Truck On D Road” remix. In his native country, he has won multiple Carnival competitions – including the “Ragga Soca Monarch” title, the Young King title and the coveted International Soca Monarch. He has released eight albums independently and three additional albums on VP Records – Revelation (2002), Global (2007) and Differentology (2014) – the latter being a joint venture with RCA Records.

Fay Ann Lyons
Fay Ann Lyons is already a superstar in her native country of Trinidad and across the Caribbean. During Trinidad & Tobago’s Carnival season’s annual competitions, Fay Ann has set the record as the only female artist to score the Carnival Road March title three times, taking the crown in 2003, 2008 and 2009. In 2009, she also won International Soca Monarch in Groovy, People’s Choice and Power category and is the first soca artist ever to win that soca ‘triplet’ of titles. In addition to these feats, she has taken home 17 awards between the COTT (Copyright Organization of Trinidad and Tobago), NACC (National Action Cultural Committee Trinidad and Tobago) and SAO (Soca Awards Organization). The Point Fortin native has soca in her DNA. Her father Superblue, a soca legend who has won the Carnival Road March title nine times and Trinidad Soca Monarch competition seven times, was instrumental in honing Fay Ann’s skills as a songwriter and performer. She became a front-liner for the band Invazion led by Naya George and today is an official member of the Asylum band (previously known as “Censation”), founded by her husband and soca royalty Bunji Garlin. Fay Ann continues to tour worldwide and is recording her first solo full-length album on VP Records.

Massive B (Bobby Konders & Jabba)
Massive B was formed over 10 years ago with DJ Bobby Konders’ vision of starting his own sound system. At its start, the voice behind Massive B was none other than Jabba. There have been many additions to Massive B as it continues to grow. New members include Big Dawg, Chudney Shotta, D-Life and X-Man, among others. Massive B has toured all over the globe, playing major festivals and dances, and representing NYC along the way. Locally, Massive B is a Brooklyn staple, performing annually at the borough’s West Indian Day Parade and weekly at the Buzz Nightclub for ‘Fire Sundays,’ where they spin the hottest reggae, dancehall, hip hop, R&B, and soca music. Bobby and Jabba can also be heard on-air every weekend on Hot 97 FM.