With origins in Kingston, Jamaica in the late 1950s as Randy’s Record Mart, Vincent and Patricia Chin’s small used record business would grow to become one of the world’s largest independent record labels, with a catalog of 25,000 recordings. Based in New York and known as VP Records since 1977, the VP and Randy’s story is woven into the story of Jamaican music itself, from ska to rocksteady to reggae to dub to dancehall.

Randy’s – The Roots of VP Records

Vincent and Patricia Chin started Randy’s Record Mart by reselling used records out of their shop at 36 East Street in Kingston, Jamaica in the late 1950s. Vincent Chin worked for Isaac Issa, stocking new records into jukeboxes and accumulating the records he took out. These records were the springboard for what would eventually become the largest reggae record company in the world.

In the early 1960s, Jamaica was on the cusp of a transformation from being a music importer to a prolific creator of original recordings, at the same time on the verge of becoming an independent nation after hundreds of years of British colonial rule. As proud Jamaicans moved abroad and wanted to hear the new sounds from home, the export market for Jamaican records blossomed. In 1962, the Chins moved to 17 North Parade and within years converted part of their new shop into a studio. From 1968, ‘Studio 17’ became one of the island’s top studios, eventually recording thousands of artists from Bob Marley and The Wailers to Peter Tosh, The Heptones, Dennis Brown, Gregory Isaacs, Burning Spear, nearly all of the new genre’s top acts from the late 1960s to the mid-1970s.

The name Randy’s became synonymous with the golden era of reggae.

Jamaica in the 1970s was a challenging environment for a small business aspiring to compete in a global market. After two decades in Kingston, Jamaica, Randy’s founders Vincent and Patricia Chin set their eyes on New York City, with its growing Jamaican community and access the world’s largest market for recorded music. After relocating to a small shop at 170-03 Jamaica Avenue in Queens, New York in 1977 (and later to 170-21 Jamaica Avenue), the Chins continued the retail, manufacturing and distribution model developed in Kingston. 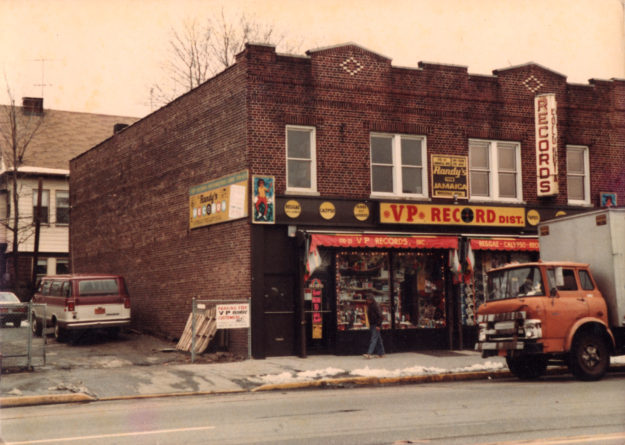 The early 80s was in many ways the end of the classic era for ‘reggae,’ the popular Jamaican style that had emerged from Jamaica in the late 1960s. In an ever-changing, creative environment, the music was ripe for reinvention by the mid-80s, and digital production technology was the catalyst. Prince Jammy’s production of “Sleng Teng” featuring singer Wayne Smith is well documented as a turning point in Jamaican music. This is when ‘dancehall’ became a style and sound distinct in many listeners minds from traditional ‘reggae.’

After Jamaican music’s identity had hardened in the wake of “Sleng Teng,” ‘dancehall’ was the term associated with the generation of deejays (rapper or emcees) who had been on the rise for nearly two decades but who were now on top.

The 1990s saw the launch of successful compilation series Strictly The Best, Reggae Gold, and Soca Gold, followed by Riddim Driven in 2001.

Into The New Millennium

The late 1990s would find VP Records on the cusp of commercial breakthroughs with Beenie Man and Lady Saw providing two of the biggest releases of the decade in Many Moods Of Moses and Give Me The Reason.

A successful recording artist since the birth of lovers rock, Beres Hammond reached iconic status by the end of the 1990s with a series of superb singles and albums on VP, true to his roots but with a contemporary edge. His recording career reached a commercial peak in 2001 with Music Is Life, featuring singles “Rock Away,” “Ain’t It Good To Know,” “Angel Eyes,” and “They Gonna Talk.”

In 2003-2004, Sean Paul and Wayne Wonder found the magic formula for mainstream ‘crossover,’ thanks to VP’s distribution and marketing partnership with Atlantic Records. Sean Paul’s second album, Dutty Rock, was a multi-platinum seller in 2003 and won the Grammy Award for Best Reggae Album in 2004, while Wayne Wonder enjoyed similar success with his Grammy-nominated No Holding Back album. The two were linked by the enormously popular Diwali riddim, the basis for Sean Paul’s “Get Busy” and Wayne Wonder’s “No Holding Back.”

These accomplishments allowed VP to invest additional resources into core artists including Sizzla, whose album Di Real Thing from 2003 would become his most enduring VP project with his most popular song to date, “Dry Cry (Just One Of Those Days).” Roots reggae singer Luciano had one of his biggest albums in this era with the Serious Times in 2004. Elephant Man, Tony Matterhorn, TOK, Jah Cure, Gyptian, Queen Ifrica, Romain Virgo, and Etana also had major hits with VP after the turn of the century.

In 2005, VP began releasing the work of Tarrus Riley, who held the torch for reggae for most of the 2000s and remains relevant in both reggae and dancehall.

In 2008, the VP Music Group purchased Greensleeves Records, a British record label dating to 1977 with a catalog that encompassed much of the same music VP released in the US in the early 1980s, in addition to its more recent marquee artists Mr. Vegas, Vybz Kartel, and Alborosie. Acquisition of the Greensleeves catalog has allowed VP to market over 25,000 songs, which in addition to traditional vinyl and CD formats, can now be heard on all major streaming platforms – Spotify, Apple Music, Deezer, Tidal, Amazon Music, Google Play, etc. VP also established an independent distribution arm, VPAL (VP Associated Label Group) in 2009 to help independent producers and artists bring products to the market.

Through the years, succeeding generations of the Chin family have been active in the day to day management of the company, with co-founder Patricia enjoying matriarchal status. With offices in New York, Miami, London, Kingston, and satellites in Tokyo and Rio, VP Records and the VP Music Group are truly global in its operation.

(The above text was adapted from “A Reggae Music Journey,” a historic visual display and exhibition created in 2019 for the Donald Sangster International Airport in Montego Bay. An expanded version of this company history, written by Carter Van Pelt, is found in the liner notes to Down In Jamaica – 40 Years of VP Records deluxe vinyl and CD box set.)