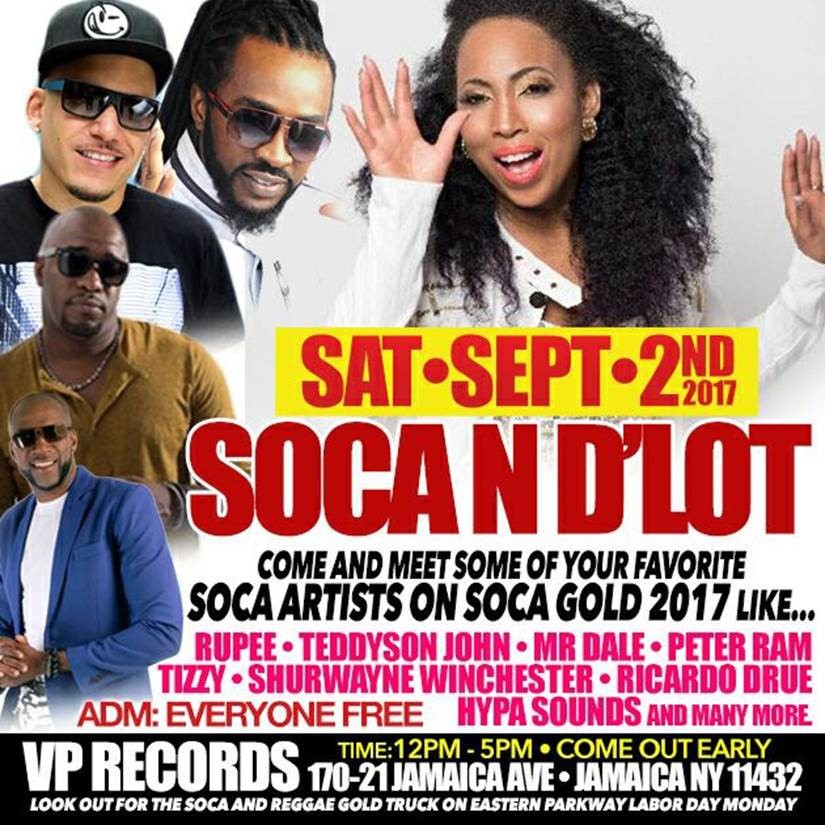 On Saturday September 2nd from 12-5pm, Soca N D’ Lot will be held at the VP Records store at 170-21 Jamaica Ave in Queens. The free event is a carnival warm up for patrons to meet and greet some of the most popular Soca artists featured on “Soca Gold 2017. ” Invited artists include; Rupee, Teddyson John, Mr. Dale, Peter Ram, Tizzy, Shurwayne Winchester, Ricardo Drue and Hypa Sounds among others.

“There is no better way to celebrate the carnival season than with soca music,” said Edwin Howell, Retail Manager & Director of A & R for VP Records. “We encourage everyone to come out and enjoy themselves while meeting some of the artists from ‘Soca Gold 2017’.”

After a long hiatus, VP Records is proud to announce their collaboration with [boomstation.net] Boom Station in staging a performance float for at the annual WIADCA Labor Day Caribbean Carnival, Monday September 5th. Supplied with a full masquerader camp, the VP/Boom Station branded float will grace the parkway with DJs and live performances.

“We are very excited to have a presence again at one of the largest West Indian Carnivals,” said Dane Bogle, Radio/Promotions Manager at VP Records. “There will be no shortage of energy and good vibes from the truck, as we represent some of the labels biggest releases of the year.”

‹ Bunji Garlin Back with New Album “Turn Up”