Peer to Peer with Macka B 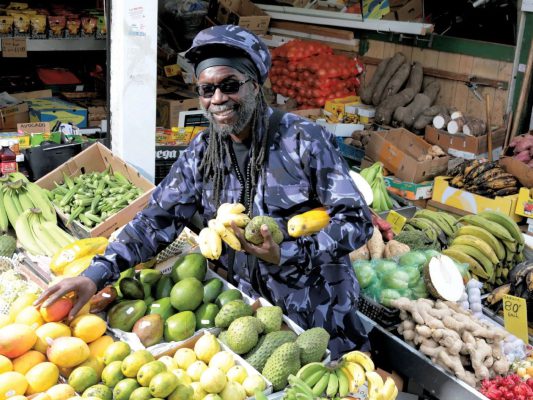 Macka B’s interest in music began at a young age.  Impressed by the heavyweight sound of the Lord Barley sound system playing in the blues party next door, the vibrant reggae beat found a place in the budding Reggae ambassador’s heart.

Putting focus on a healthy lifestyle, Macka impressed the world with his single “Cucumber” and his Medical Mondays series on YouTube.

VP: For our readers who are unaware of ‘Ital Living’ can you give them a brief description of what it means?

MB: Ital living is a term originated by Rastafari people, it is a natural way of living a livity. living closer to nature, eating only foods from the earth with the natural life force and energy. No meat, fish or dairy, basically what is now called vegan but with less processed food. Also abstaining from the use of salt especially white salt with its negative effects.

VP: How did ‘Wa Me East Wednesdays’ & ‘Medical Monday’ start?

MB: I had been vegan for many years and decided to do a song called Wha Me Eat explaining the amount and variety of foods that vegans can eat. It was very popular and parts of the song became viral memes on social media. I was reasoning with my children who told me it would be a good idea to be more active on social media. So we came up with Medical Mondays, telling people about the great benefits of fruits and vegetables and Wha Me Eat Wednesdays which could also be vegan recipes etc. After just talking the first few I did one in Macka B style with riddim and rhyme and it went viral. Then a few weeks later I did the Cucumba and that went super viral and the rest is history.

VP: Vegan products are very mainstream now with many well-established brands offering Vegan alternatives, what are your thoughts on this?

MB: I don’t trust the brands who just jump on the bandwagon, I have a good memory for instance I don’t want no McPlant. For people transitioning there are more options which can be helpful in their journey.

VP: What do you have planned for 2022 – any shows and releases we can look forward to?

MB: 2022 is looking positive. A lot of shows and festivals coming up in the UK, France, Belgium, Austria, Croatia etc. As for recordings, I have some singles out which are being very well received. My Wife can answer my phone on the Top secret label. Conscious music produced by Zed2dizee.Look out for One law fi dem with the Hempolics and some Jamaican collaborations.

‹ Peer to Peer with Alexandre Grondeau

Peer to Peer with Rocky Dawuni ›