Peer to Peer with Jukebox Arena 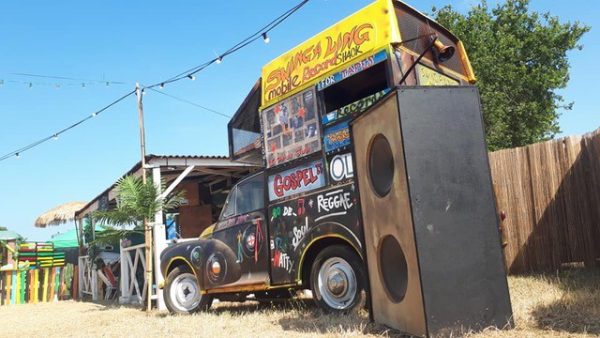 JA:  I have always been passionate about audio equipment, and all kinds of DIY as I work as a carpenter.  At first, I organised a few sound system dances with friends in Guadeloupe, French Caribbean islands. Then I came back to live in France and, during a music festival I thought it would be cool to have a place where the public could choose the music and really become an actor in the sound system scene. That’s how I imagined the concept of the “jukebox arena” taking the public further into the experience, a setting was needed.

I started with a Creole house to install the jukebox, then other iconic elements of sound system culture came to enlarge the jukebox arena like Charley Ace’s ‘Swing A Ling, Randy Chin’s portrait, and the sign of the Alpha Boys School etc.

JA:  The jukebox arena is our most serious project concerning sound system culture.

JA:  My first project that really broke through was definitely the jukebox arena.

JA:  Now we are working on the jukebox arena for this summer. We are preparing new decorative elements for the pleasure of the eyes and ears of the public as well as a lot of work on the selection of the jukebox.

My friend and active crew member @maxmo_deco is preparing a series of portraits of sound system legends. I also work with my sister on replica speakers like the VRocket sound and many other surprises.

For future projects we are working on a form of conference exhibitions to introduce the general public to sound system culture using the jukebox of course.

Musical selections that are Strictly The Best:

‹ Peer to Peer with Emma Mathurine

Peer to Peer with Alexandre Grondeau ›