Peer to Peer with Dubplate Pearl 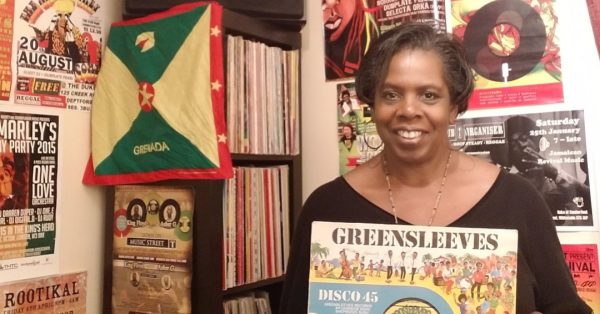 Dubplate Pearl is a selector in London who has been very active on the scene.  In speaking to her about Greensleeves, and her acknowledgement of the importance of the label, we thought it would be a good idea to share her contribution with the Planet Reggae community.

VP: Greensleeves celebrates 45 years in the industry this year – how did you first hear about the label?

DP:  I lived in Shepherds Bush for most of my life and first heard about the label via your shop which was more or less on my doorstep and frequently visited.

VP: Our shop at 44 Uxbridge Road was a hub for the West London community – please tell us about your memories of the shop?

DP:  Too many wonderful memories.  One I remember fondly was when Johnny Osborne visited the shop, I was there on my lunch break as usual and had bought one of his 12″ records which he signed for me.  Also talking with Chris and Jeff Angus who worked there at the time, they were always ready to talk about the latest releases and make good suggestions.  Also from a female perspective, I never felt out of place (not like some other record shops at the time).  Plus meeting like-minded people in the shop from all areas of London.  I have a long-time friend who lived in North London at the time who I met in the shop. Great times.

VP: In the late 70s / early 80s Greensleeves led the way with a heavy set of 12” and LPs – producers such as Junjo Lawes, Linval Thompson, Augustus Pablo and Prince Jammy and more led the charge. Can you tell us about your favourite LP or 12” from this era?

DP:  Yes, my favourite LP is Augustus Pablo’s “King Tubby’s meets Rockers Uptown” and the title track – still sounds as awesome as when I first heard it – played it at a recent event where I was DJ’ing and it went down very well.  Can’t believe it’s 40 years old!   My favourite 12″ from that time is the Wailing Souls’ “Kingdom Rise and Kingdom Fall / A Day Will Come” – the Wailing Souls is one of my favourite bands, with the Roots Radics backing, you can’t beat the musicianship on these tracks – absolutely superb.

VP: How important were the Soundsystems pushing the music being released by Greensleeves – which ones were key to its success?

DP:  Very important because you didn’t hear a lot of reggae on mainstream radio at that time, apart from hearing it via the late Tommy Vance, Steve Barnard and the Late Tony Williams – later David Rodigan.   Also from Jah Shaka, Channel One, Coxsone and many others, not just in London but all over the country. Back then I attended a lot of sound system events at Town Halls in Acton, Wandsworth (they had Sunday 12 noon to till 12 midnight sessions where at least five sound systems played) and Brixton.  Also, I used to attend Southall Community Centre where Jah Shaka and Channel One often played back then.  Plus all the many clubs (Four Aces, Noreik, Bali Hi, Nightingale and Night Moves) in and around London I attended where sound systems played at that time – sadly those clubs are all gone now!

VP: The label’s artwork is very iconic – can you tell us about your favourite piece?

DP:  Yes, the flyover, the shop and the fruit and vegetable stall next door that I also visited.  That image is still memorable to me every time I drive past before Westfield took over!

VP: With all the musical changes coming from Jamaica since the inception of the label how did Greensleeves stay ahead of the curve?

DP: With the support in promotion, events etc., you gave to new and upcoming artists which was and still is very important when the music style changed and with your continuous support.

VP: Greensleeves was one of the key, longest-running and most diverse UK Reggae labels ever – why do you think it was so successful?

DP: Because it is well established, genuine, supportive, independent and kept to its origins which is very important in these times – a well-known and loved brand.

Listen to Ultimate Greensleeves on Spotify

Peer to Peer with Yng Cptn ›