Peer to Peer with Dub Vendor 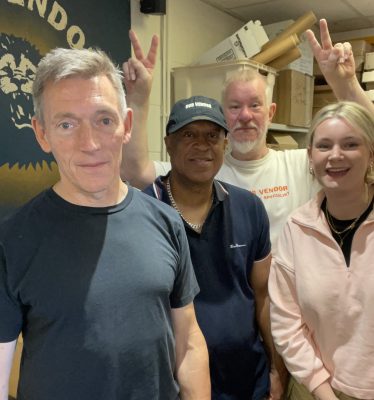 VP:  Can you please introduce yourself and the team at Dub Vendor?

DV:  I’m Lol, the rest of the team is John, Louise, Papa Face and Shere Khan.

VP:  Dub Vendor has been running in one form or another for 44 years – how do you think you’ve been able to successfully navigate the changes in the industry over the years?

DB:  We have always tried to present the broadest spectrum of reggae music in its many guises. The business changed with the advent of the Compact Disc and then the download.  Almost overnight the demand for physical product, particularly reggae from Jamaica, slowed to a trickle and eventually stopped altogether when the island’s pressing plants closed.

Our two shops, like many other record shops, closed, but we had from the start maintained a mail order service which had gone from a monthly mail-out list to online retail.  We focused on that and thanks to the continued demand for vinyl amongst roots and revive fans, we’re still here.

VP: There is such a diverse range of Jamaican music on the market at the moment, what titles and eras of the music are selling best at the moment?

DB:  The roots people love their vinyl, a good contemporary roots tune can sell very well. Currently we have three new 7” on Jah Shaka Music that are selling very well.  It’s amazing that the roots scene is still so lively, with new young producer / artists coming through all the time from around the world inspired by the music and sound system scene of the late twentieth century!  The revive scene often crosses into the roots scene, but vintage reggae music; ska, rocksteady, roots, digital etc. all have their devotees.  The recent Augustus Pablo LP from Onlyroots / Deep Roots has sold very well.

VP:  Greensleeves shares a similar path with Dub Vendor and has been running for around the same amount of time. Do you guys have any special memories of Greensleeves or a favourite tune from the catalogue?

DB:  I remember going to the shop in Shepherds Bush back in the early eighties, and remember the stacks of boxes from the pressing plant. Greensleeves was really on it at that time with all those Junjo and Linval Thompson productions.  Ranking Dread’s Shut Me Mouth was a favourite, but the Scientist dub LP’s, especially Space Invaders, were inflicted on my long suffering neighbours hard!

VP:  Are you seeing a lot of younger people purchasing music from Dub Vendor? What are your thoughts on Reggae’s new generation?

DB:  It’s difficult to get clear view of the age of customers when you are working online, but judging from the quantities of new roots we sell I’d say a lot of them are a lot younger than me!  They know what they like, they are all pretty savvy when it comes to connecting on social media and word gets around regarding which tunes are hot.  The senior sound system operators such as Jah Shaka, Channel One, Aba Shabti and Iration Steppas set the scene and the younger sounds including Shere Khan, Ital Power and Young Warrior appear to be determined to carry on in that spirit, and more power to all of them!