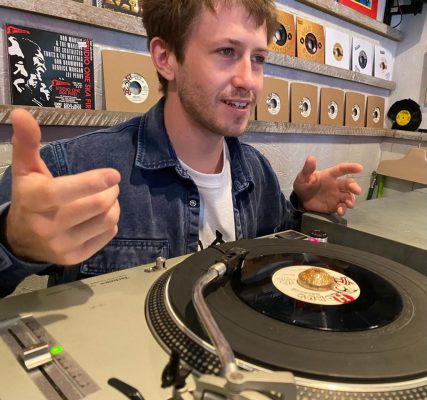 In music, we spotlight musicians, singers and producers; today we spotlight a stalwart in the record store field, and that is Ben Bell of Lion Vibes Records.

BB:  Buying records initially, then selling a few to buy other records! Also starting my own label Horus Records in 2013. My first job in a record shop was with Simon at Music Temple in Brixton.VP:  What was your first notable project?

BB:  Within the record shop world it would have been helping Matt start the Lion Vibes shop in Brixton at the end 2015 and helping build that up over the following years. Within the label world this would have been my first releases with Horus Records. Our 2nd release was a reissue LP “World War Dub” produced by Prince Hammer. Worked with loads of different people in the industry on it.. sourcing the audio, mastering engineers, tape transfer people, doing interviews for the sleeve notes, manufacturing, distribution and so on! Was a fast learning curve with many a mistake along the way

BB:  Probably starting the section on the Lion Vibes website to sell new releases and reissues.. at the time we started it Lion Vibes was only selling vintage original press. It took a few months to get off the ground in 2018. I believe there were no sales at all for the 1st 2-3 weeks! But 6 months later could see it was going to work

BB:The constant process of trying to track down every new reggae release coming out on vinyl! We’ve got some of our own releases coming up with Lion Vibes And Tudor from Creation Rebel Soundsystem. We are also doing events with Tudor at the Hootananny every 3 months. Had some really incredible line ups, and got some more top tier reggae artists in the pipeline!

BB:Most reggae music comes to me either through records, bandcamp and youtube.. on my spotify it’s all over the place! Last things listened to was Digga D and before that Jorge Ben!

Peer to Peer with David Muir ›