Peer to Peer with Alexandre Grondeau 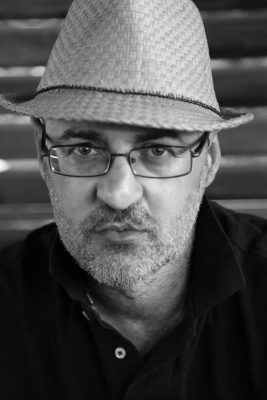 Alexandre Grondeau is professor in Geography at the Université Aix-Marseille in France. Globe-trotter and writer, he is also a music critic who specializes in Jamaican music in France. He founded the web magazine www.reggae.fr, more than 20 years ago.

AG:  I first started at the very beginning of the internet era in France, in the middle of the 90’s by sharing music critiques on a website called music.fr. I was already passionate by Jamaican music and quite quickly decided to create my own website dedicated to reggae music (1998). Step by step, a team of passionate people came to me and became the Reggae.fr Team. Some of them are still here today with us.

AG:  My first notable project was the production of Respect Tv, the first video show on the web dedicated to reggae music (in a time where youtube did not exist!). Our first shows featured exclusive interviews with Burning Spear and Anthony B (first time in France at the time!).  Respect Tv was what motivated the creation first version of Reggae.fr, a dedicated platform to reggae music, which was not easy in an environment where paper press was still very strong.

AG:  In 3 years, we became the first website in terms of occurrence on the web (first referenced on Google – 100 000 members subcribed to our newsletter, with 5000 to 6000 thousands visitors a day).

Travelling all around the world, I have had the chance to interview hundreds of artists, and to produce hundreds of video reports / interviews, leading to the production of the documentary movie in 2016 called Reggae Ambassadors La légende du reggae, which obtained an award in France in 2017. This documentary movie goes together with a book of the same name. I have published 10 other books, including one about French Reggae, one about Bob Marley, and a series of 4 novels (Génération H, where reggae music is present, which was an underground best-seller in France, with more than 50,000 copies sold).

AG:  We are currently working at developing Reggae.fr Webradio, which already existed for a few years and which has literally exploded since the first lockdown. We are trying to propose more and more original programs, including our new talk show L’Apéro every Thursday evening, which is also broadcasted live on Facebook and which works very well. In these times where concerts and international travels are still restricted, this talk show aims at keeping the link alive between artists (notably international artists) and French audience.

Listen to our Total Reggae Playlist on Spotify:

‹ Peer to Peer with Jukebox Arena

Peer to Peer with Macka B ›