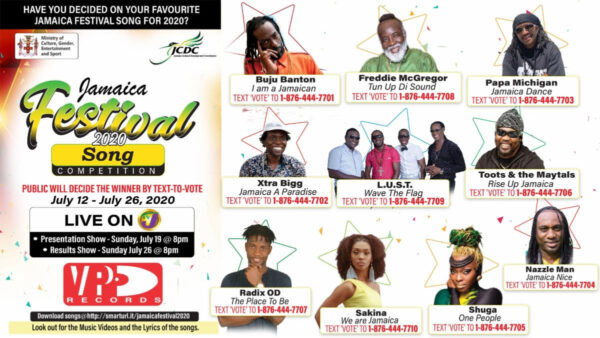 VP Records YouTube page will live stream the Jamaica Festival 2020 Song Competition’s Presentation Show, Sunday July 19th at 8pm JA time and Results show on Sunday July 26th at 8pm JA time. The public will decide the winner by text-to-vote.
In a major development, the Minister of Culture, Gender, Entertainment and Sport, the Honourable Olivia Grange, has announced plans to take the top ten entries in the 2020 Jamaica Festival Song Competition to the world.
“I’m really happy to announce that we’re going to be on Amazon, Spotify, and all the major streaming platforms, for the first time,” said Minister Grange on Tuesday as she received confirmation that the album Jamaica Festival 2020 Song Competition” was now available for pre-order purchases on iTunes and Amazon Music services.
Distributed by VPAL Music, the 10-song album is now available for download or streaming. Commenting on the development, Minister Grange said: “Through streaming technology these qualifying songs are available worldwide and that expands the stage; the world is now our stage for the Jamaica Festival Song competition. It is historic.”
The finalists in the 2020 Jamaica Festival Song Competition include Reggae icons Freddie McGregor, Toots & The Maytals and Buju Banton. Popular artistes Papa Michigan, Nazzle Man, L.U.S.T. (featuring Lukie D, Thriller U, Singing Melody & Tony Curtis) and Jamaica’s Rising Stars winner Shuga, upcoming dancehall artistes Xtra Bigg and Radix OD, as well as the actress and television presenter Sakina round out the list of performers. The move to package the Jamaica Festival Song finalist entries available for downloads and streaming is part of Minister Grange’s initiative to revitalize Jamaica’s annual Song Festival.
Minister Grange said: “Jamaica Festival used to ignite the country and bring the nation together in such a beautiful way. We want to bring back that feeling of national unity and hope. We have made tremendous strides, but we have more to do.” In keeping with restrictions on public gatherings because of the covid-19 pandemic, the usual island-wide road shows and public performances by the Festival Song finalists will not be held this year. Instead, the Ministry has engaged national radio and television stations and has been using social media to bring the finalists and their entries to the public. The winning Jamaica Festival Song for 2020 will be decided on July 26 by popular vote.
VP RecordsJamaica Festival 2020 Song Festival