Images Through The Lens of David Corio 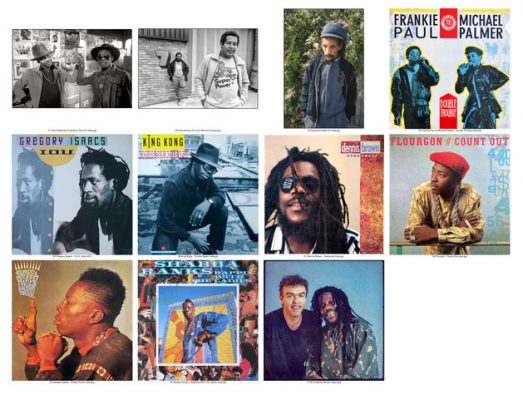 Some of the most memorable images of Reggae artists and industry players has been captured through the lens of David Corio.

As we close Reggae month, we spoke to David about his iconic photography.

VP: How did you get your start in the business?
DC: My first regular experience of hearing reggae was listening to John Peel’s late-night radio show. After leaving school and going to art college in Gloucester I began to hear more music and one of the first reggae albums I bought was the Greensleeves release ‘Best Dressed Chicken In Town’ by Dr Alimontado in 1978.

It was a revelation and opened my ears to much more reggae. Moving to London soon after, I started to freelance for New Musical Express – the UK’s most popular music weekly newspaper and my first commissioned shoot was Jacob Miller and Inner Circle live at The Marquee – a truly amazing show. In 1981 NME asked me to shoot Clint Eastwood & General Saint at the Greensleeves record shop at Shepherd’s Bush as their ‘Two Bad DJ’ album had just been released. The shop was rammed with the latest releases and boxes of records. They were an energetic pair, constantly striking poses and made it easy for me to get some great shots. It was a shame the shop closed soon afterwards.

VP: What was your first notable project?
DC: I was contacted by Chris Cracknell to use some of the portraits I had taken for different magazines and that started a long relationship with Greensleeves and later V.P. Records. I’d begun working for City Limits and Black Echoes as I became more focussed on photographing black music and my first Greensleeves cover was ‘Double Trouble’ by Frankie Paul and Michael Palmer – photos I had taken at Reggae Sunsplash on my first trip to Jamaica in 1984.

That was the start of many collaborations with the great designer Tony McDermott. Greensleeves was based on an industrial estate on Brackenbury Road in west London and I would go out there for interviews when artists were passing through London. Music was usually blaring in the warehouse but there was just a tiny office space for interviews. I took photos of the ever-cheerful King Jammy and Junior Murvin outside (that’s Greensleeves in the background) and directly opposite there was some wooden fencing and some greenery which I felt was more suited for Augustus Pablo.

He was very humble with a quiet voice and a dry sense of humour but quite shy in front of the camera. He knew that it was worth taking time and concentration to get some good photos though which made it easy for me.

VP: Do you have favorite / memorable projects?
DC: Over the years I did some sleeves which were photos from my archives like Gregory Isaac’s ‘I.O.U.’ and King Kong’s ‘Trouble Again’ and many in improvised photo studios like Dennis `Brown’s ‘Overproof’ – taken in my living room, and Flourgon’s ‘Count Out’ taken in the hallway of a council flat in Brockley. One of my favourite shoots was with Shabba Ranks. I had discussed with Tony what to shoot as his debut solo album for Greensleeves was to be titled ‘Golden Touch’.

I never use stylists, or hair or makeup as I much prefer to work one-on-one with the people I am photographing. It makes it much more intimate and less distracting. We got some great pictures at the Harlesden flat he was staying at using some orange gels over the lights. He is wearing the same outfit for some more shots I took outside. They were used for ‘Rapping With The Ladies’ which also came out in 1990. If you look closely you can see it was his birthday that day and he is wearing a ‘I Am 24’ birthday badge on his top.