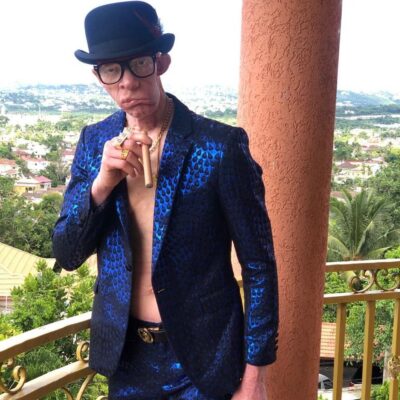 As Greensleeves Records celebrates its 45th anniversary in 2022, the VP Music Group highlights the influential label’s key artists and catalog.

Yellowman (born Winston Foster on January 15, 1956) was a transitional figure in Jamaican music, solidifying the reggae emcee’s rise to preeminence in the dancehall and foreshadowing the deejay tsunami to come by the mid-80s. Yellowman’s lyrics were clever, unrestrained and boastful in a way that have resonated for more than four decades across more than 50 albums.

Producer Henry “Junjo” Lawes was top the producer of the early 80s, and Yellowman quickly became his top artist. 1982 was without question the breakout year for Yellowman, with as many as eight albums released by various companies.

VP Records released several of his earliest singles and his first LP, Duppy Or Gunman, as did Greensleeves Records with the equivalent, Mister Yellowman. Both Greensleeves and VP released the emcee’s most enduring, recognizable, sampled, and difficult to spell track, none other than “Zungguzungguguzungguzeng,” which became the title of another essential Greensleeves album in 1983.

Greensleeves would continue to paint the Yellow legacy in the 80s and 90s with Two Giants Clash (with Josey Wales), Nobody Move Nobody Get Hurt, Galong Galong Galong, Blueberry Hill, In Bed With Yellowman, and Yellowman’s Good Sex Guide.

Greensleeves Records was founded in 1977 in London and has become one of the most influential and respected brands in the reggae and dancehall worlds, bringing artists ranging from Barrington Levy, Dennis Brown, Yellowman, and Wailing Souls to Alborosie, Shaggy, Sizzla, Mr. Vegas and Vybz Kartel to global audiences. Greensleeves Records has been part of the VP Music Group since 2008.

‹ NEW GEAR for the New Year for Intence