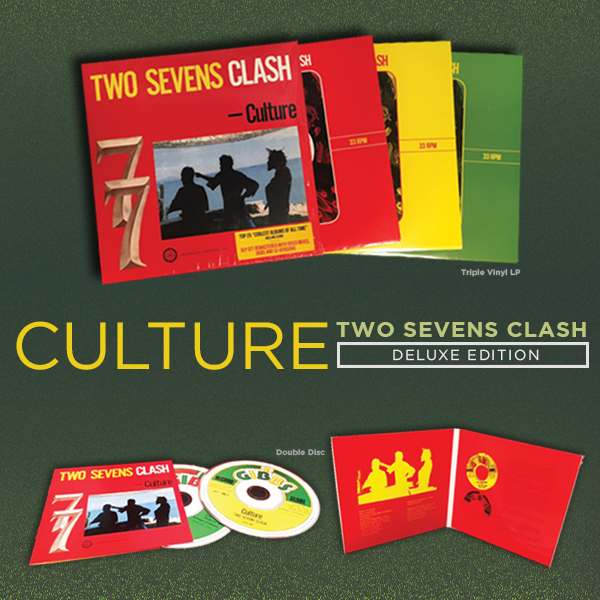 Commemorating the 40th anniversary of the release of the seminal reggae classic “Two Sevens Clash” by Culture, VP Records will release a deluxe edition of the album on June 9th. The historic album became a cultural phenomenon in 1977, referencing Marcus Garvey’s predictions of chaos occurring on the date 7/7/1977. The song and album are today, among the most influential records in the reggae genre.

Culture, the vocal trio comprising of lead singer Joseph Hill and harmony vocalists Albert Walker and Kenneth Dayes created the ten songs on the record with legendary producer Joe Gibbs. The message and intention in the music was to spread Rastafari’s message of peace, love and global unity. Highlighting the suffering of their ancestors and Garvey’s messages of repatriation in their songs gave the album its raw and classic sound, which helped to define the roots reggae era.

In the new release, liner notes by Don Letts gives the back story of the impact ‘Two Sevens Clash’ had locally and how the song prompted many Jamaican businesses and schools to close on July 7, 1977. The songs, noted as “conscious reggae for conscious people,” included hits such as ‘See Dem A Come’, ‘Natty Dread Taking Over’ and the title track ‘Two Sevens Clash.’

The 2017 VP release, re-mastered by Pete Norman at Final Tweek and executive produced by Christopher Chin, features two discs (on CD and 3 discs on vinyl LP) of remastered tracks. Disc one contains the 10 original songs, while disc two includes extra tracks by The Mighty Two, Shorty the President and Joe Gibbs & The Professionals.

“Two Sevens Clash made an impact on the musical landscape in the late 70s and still resonates forty years later,” said Christopher Chin, CEO of VP Records. “We are proud to be associated with this important and timeless album.”