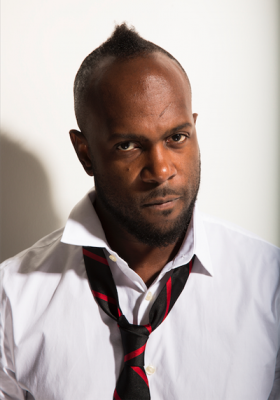 VP Records A&R Edwin Howell is excited about Garlin’s new journey. “I first heard Bunji in 2001 on his track ‘Gimme The Brass.’ He had such a unique voice, and I knew he had the potential to be a soca mega star. He can do reggae and soca, and now fusing his sound with EDM is perfect combo for the genre. I am happy to be a part of this venture and taking the movement global.”

The anticipated album will be his first full-length release since 2007’s Global and follows his recently released digital-only EP Carnival Tabanca on VP Records.

Known to many as the “Viking of Soca,” Bunji Garlin has taken the genre to new heights. His explosive single “Differentology (Ready For The Road),” which was remixed by Major Lazer as well as Busta Rhymes, is currently a massive hit in North America more than a year after its release in the Caribbean. In 2013, the single received a Soul Train Award win for Best International Performance, was featured on ABC’s Grey’s Anatomy, won NYC’s HOT 97 FM’s Battle of The Beats competition and chosen by NPR as one of the year’s favorite anthems, as well as MTV Iggy’s Song of the Year.

Watch video for “Differentology (Ready For The Road)”

“When Digiwaxx Media first began to work Differentology, I knew this record had the potential to do something great on the urban radio landscape,” says Corey “CL” Llewellyn, CEO of Digiwaxx Media. “The recent deal between Bunji Garlin and RCA/VP is proof that the appeal of Bunji and the incredible music he creates is widespread and has immense potential,” he adds.

Born Ian Alvarez, Bunji Garlin is known for his high-energy stage shows, lyrical confidence and eloquence. The Trinidadian artist and international soca royalty is both a composer and performer of soca and ragga soca. The latter is a blend of soca with dancehall music that he made his own during the start of his career in the late ’90s. He has won the “Ragga Soca Monarch” competition in both 2000 and 2001, the Young King title in 2001, the coveted title of International Soca Monarch in 2002 and then reclaimed this title for three more years.

This past Sunday (June 1), Garlin recently performed at HOT 97’s annual Summer Jam. He will also be hitting the road throughout the summer, including dates on Mad Decent’s Block Party tour.

” ‘Differentology’ is the perfect track… the song of the year not just for Trinidad but the whole Caribbean….with its massive builds, Spanish guitar, and celebratory lyrics, it could very well become your festival anthem.” – ROLLING STONE

“Garlin is on the verge of the elusive crossover success….merging of soca with EDM… expanding the future of Trinidad’s homespun genre.” – The FADER