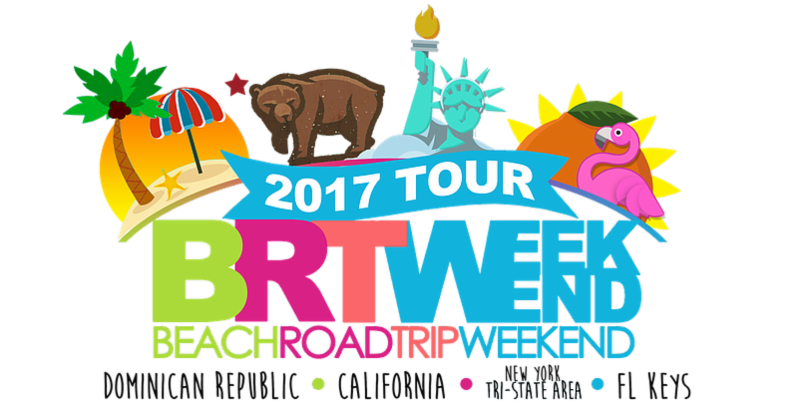 Beach Road Trip Weekend (BRT) will take place starting today (November 3-6) in Riviera Beach, FL. Inspired by Caribbean culture, the all-inclusive party weekend inspired by Caribbean culture is back after 5 prosperous years and successful 2017 runs in Dominican Republic, California and NY Tri-state area. This time around #BRTweekend is partnering with VP Records iconic annual compilation series “Strictly the Best.” To celebrate volumes 56 & 57, the partnership will bring Strictly the Best themed parties to life with branding and visuals throughout the different venues as well as featured music from the compilations played by BRT DJ’s.

Events include the V Maui Wowi: Beach Bonfire which includes celebrity guests Ishawna and Masicka who has the song “Roll Clean” on Strictly the Best 57. Other popular parties include the Xtreme Wet N Wild “Water Party”, the BRT Glow Wonderland, the Jouvert Breakfast Party and the BRT “All White!” Grand Finale.

The partnership has also included a DJ contest that gave contestants the opportunity to join the team as a DJ on BRT’s 2018 tour. The top 5 mixtapes were judged by followers of the BRT Page via Soundcloud, Instagram, Twitter, Facebook and the website. Titan Boyaka Smash, pictured above, won the contest with a mix that caught the attention of BRT fans. Connect with him on Facebook, Twitter and Instagram. The winning mix can be heard here.

Volume 56 features current and emerging lover’s rock and roots reggae jams such as “Trouble” from Romain Virgo and “Better than the Stars” from Christopher Martin, in addition to exclusives such as “This Is Love” from Gentleman, “Smile from Jah-Lil, and “No Soul, No Heart, No Love” from Junior Kelly. Other standouts include ‘Hustling’ by Huntington Beach California based band Simpkin Project who recently released their album “Beam of Light” on Dub Rockers label (A VP Records imprint) on September 29th. Newcomer Spiritual’s passionate ‘Time has Come’ is also a gem on the compilation. A new remix to ‘Would you Love Me’ by Grammy nominated band Raging Fyah featuring Brazil’s Cidade Negra and Queen Ifrica’s ‘All That I’m Asking’ and more bring the album full circle.

Volume 57 features new and exclusive dancehall such as “Roll Clean” from Masicka, “Hot Gal” from DJ Spooky, and “Time Up” from current dancehall sensation Shenseea. Also from Shenseea is ‘Movie’, the remix to ‘Loodi’ – the smash single with Vybz Kartel which amassed over 11 million views on Youtube. Alkaline’s “Pretty Girl Team” which has amassed over 12 million views on its audio only song and Ding Dong’s “Fling (Yuh Shoulda)” which recently went viral with reggae sensation Chronixx doing the dance. The energetic ‘Skank & Rave’ by Beenie Man, Voicemail, Ding Dong add tremendous energy while ’21’ by Dexta Daps add the smooth rhythmic vibes. Stonebwoy’s ‘My Name’ rounds out the album with the hot afro-beats jam. Both volumes are available for pre-order now and physical distribution on November 17th.

The concept of the cover, designed by illustrator Kim Wells (@kimwellsill) veered into the world of hyper-realism with a unique air and delicate quality, incorporating graphic elements, representing sound wave movement.

“Strictly the Best” continues to be one of our most anticipated releases each year due to its ability to maintain a loyal following while being the perfect introduction for those new to reggae and dancehall,” said Christopher Chin, President of VP Records. “The 2017 editions have a nice balance of popular and rising artists as well as exclusive tracks for a great listening experience.”

About the Strictly The Best Series

Established in 1992, VP Records’ Strictly The Best is the longest running reggae compilation series in the business. Following the Reggae Gold release, the annual STB series offers a more comprehensive collection of dancehall and roots sounds that have crossover potential and cater to reggae fans alike. Each year, VP carefully compiles a library of most exclusive dancehall/reggae tunes to keep the pace with the biggest Jamaican hits. Showcasing the most buzz-worthy and talented artists, STB series has been the proving ground for many of reggae’s biggest stars including Sean Paul, Mavado, Buju Banton, Bounty Killer, Capleton and many others. If you want to know what the next big reggae hit is in the streets or on the airwaves, Strictly The Best is the only compilation.

‹ THE BAJAN KING DEBUTS REGGAE KING RADIO ON WVIP 93.5 THIS PAST SATURDAY