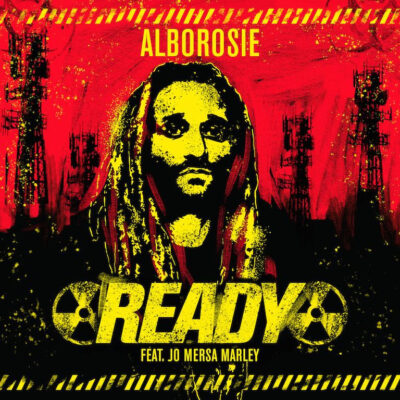 International Reggae Superstar Alborosie releases his new track “Ready” out on VP Records today. An accompanying lyric video has premiered today on his YouTube page at 12pm EDT.
Featuring Jo Mersa Marley (son of Stephen Marley/ grandson of Bob Marley), the raw, upbeat new single is the latest from the artist who recently released singles “Unprecedented Time” (Featured in Mick Jagger’s June Listening Playlist on Spotify) and “Listen to the Waves” (free single released on his birthday July 4th) which both bring light to the recent pandemic and racial injustices. “Ready” continues Alborosie’s thread of meaningful and uplifting music as the single’s lyrics explain the importance of being true and authentic to oneself and being “ready” for all that life throws at you. The lyric video contains bold and beautiful imagery with visual direction and motion graphics by Kera Campbell.
Along with the upcoming new album from Alborosie out later this year, is a much-anticipated collaborative album with the Wailing Souls titled “Back A Yard”, available August 28, 2020 on all streaming platforms, CD and vinyl LP. Produced by Alborosie, the album features an updated version of the 1992 hit “Shark Attack”, originally a commentary on capitalist exploitation and the ‘new world order’ phrase buzzing at the time. In the original video, the exploiter was a manipulative ‘shark’ with a sketchy briefcase full of loot. For the new recording, Alborosie crafted additional lyrics of street level exploitation in Jamaica, and animator Jenille Brown reimagined the shark as a record producer, extending the concept into the sphere of cultural appropriation. “Shark Attack” feat. Alborosie is available July 31, 2020 on streaming platforms and Greensleeves 7-inch 45 r.p.m. vinyl single.
Alborosie has led an expansive career with 14 albums since 2006. He has been hands on with his music as not only the artist but as a songwriter, multi-instrumentalist, producer and self-proclaimed “Dub Mechanic”. Known as the top Europe’s top grossing reggae act in live performance, he has done extensive touring over the last decade in Central America and Europe, leading to high sales and millions of views on his YouTube videos. Top rap artist, Wiz Khalifa also did a remake to one of his songs, “Still Blazin” in 2002.
Recent Alborosie projects on VP Records’ Greensleeves imprint were “Dub For The Radicals – Alborosie Meets The Roots Radics,” which was engineered, produced and mixed by Alborosie using vintage analog gear, dub sirens, reel to reel tape, and live instrumentation from Alborosie and reggae icons the ‘Roots Radics’. And the critically acclaimed 2018 album “Unbreakable: Alborosie Meets The Wailers United”, which featured performances by Barret and Downey among others.
STREAM: ‘Ready’ – Alborosie ft. Jo Mersa Marley: https://Alborosie.lnk.to/JoMersaMarley_Ready
LISTEN / DOWNLOAD: ‘Ready’ by Alborosie Ft. Jo Mersa Marley
WATCH: ‘Listen To The Waves’ Official Video by Alborosie
RADIO JINGLE: Download Alborosie’s ‘Unprecedented Time’ Radio Jingle
VP RecordsAlborosie