A Year at VP Records – Highlights from 2019 – VP Records 40th Anniversary Marked by Myriad Of ﻿Events, Releases and More

Most photos by Ajamu Myrie

2019 marked VP Records celebration of its 40 years in the United States and to celebrate, a variety of music and cultural events, products, historical exhibits and experiences, in Jamaica, across the U.S., and London, England were held. As a result of all of the events and marketing efforts, outlets such as New York Times, Forbes, Breakfast Club, Fox 5’s Good Day New York, NY1, Billboard, Pitchfork, Rolling Stone, Times of London, FADER and more have featured VP artists, executives or products this year.

“Many new initiatives were developed as part of our 40th Anniversary,” said Randy Chin, President of VP Records “and we’re eager to begin this new chapter in the label’s development.” As 2019 comes to an end, the reggae journey for VP Records continues.”

Grammy Award winning artist Estelle hit the East Coast in February with intimate performances she dubbed the ‘Estelle Experience’ launching in New York with stops held in Philadelphia, Virginia, Atlanta and Nashville. A West Coast tour was held later in the year.

Christopher Martin was in New York for two important events. Martin visited two schools in Brooklyn for the #NoDisrespect Campaign where he promoted messages of hope and a future to students. Furthering his educational, philanthropic mission, he also attended and performed at the American Foundation For The University of the West Indies (AFUWI) 22nd Annual Legacy Awards Gala to help raise funds for the University of West Indies Scholarship Fund.

The Reggae Trail is an interactive digital experience that features a map of historical locations throughout the five boroughs of New York City central to the growth of the Jamaican music industry and VP Records. Participants learn how the growth of Jamaica’s music abroad shadowed the migration patterns of its populace and how VP Records played an ongoing role in the growth of the music.

On Saturday April 13th, VP Records celebrated Record Store Day 2019 with VP Record’s annual Sound System Showcase at its retail locations in Jamaica, Queens and Miramar, Florida. This year, both VP Records retail stores have received the distinct designation as official Record Store Day Locations. To commemorate the annual celebration of vinyl culture, the free event was a day for fans and consumers to experience authentic Jamaican Sound Systems while being able to purchase classic, new and exclusive titles. For the first time, the event was streamed on the VP Records YouTube channel and archived for future viewing.

May 3- Christopher Martin’s Album, “And Then” released

Debuting at number 1 on The Billboard Reggae Chart, Martin’s sophomore offering presents a well-rounded mix of ballads and up-tempo jams, showcasing his musical versatility and growth with a celebration centered around themes of love, rising above hardship and finding the good in every situation. And Then is the follow up to Martin’s debut full length-album, Big Deal, which reached the top 5 on the Reggae Billboard Charts in 2017.

To celebrate the album release, a variety of events were held in Jamaica and the U.S. On the album’s release day, Christopher Martin was at TVJ Studios for a live performance and interview which was broadcasted on RETV, VP Records YouTube Channel at 7pm JA time/ 8pm EST and was rebroadcasted on TVJ. He also had a sold-out album release party at Milk River in Brooklyn.

The Grace Jamaican Jerk Festival hosted their official launch with the annual Taste of Jerk event at the VP Records Store in Jamaica, Queens, featuring tastings from food vendors, live streams via Reggae King radio and Irie Jam. Reggae star Chris Martin also passed through for a meet and greet and to give everyone a preview of his upcoming 2019 Grace Jamaican Jerk Festival performance.

Soca Gold Fitness 2019 launched right in time for the release of Soca Gold 2019. Soca Gold 2019 which featured only the best soca songs of the season, including work from international artists that represent the best of the Caribbean (including Trinidad, St. Lucia, St. Vincent, Grenada and more). Some of the songs featured in this years compilation include “Come Inside” by Sean Caruth, “Sweet Woman” by Tony Prescott, “Issa Snack” by Nessa Preppy, “Savannah Grass” by Kes and many more. The two-disc CD set includes 17 tracks on Disc 1 and a Soca Gold 2019 Mega-Mix by Team Soca- DJ Spice on Disc 2.

On The Riddim Hosts Queen Bremmer and Kevin Crown

On The Riddim, the series, creates a visual community for current and new fans alike to stay on top of the label’s recent news, while immersing into the culture with fun facts and interviews with artists. To hit the ground running in the first episode, hosts Queen Bremmer and Kevin Crown discuss VP Records 40th anniversary, Christopher Martin album release, Estelle, Record Store Day, Soca Gold Live, Strictly the Best Live, Taste of Jerk and more.

Prior to the release of Reggae Gold 2019, Squash’s “Never Die”, premiered on FADER as an exclusive track. In addition, the exclusive lead track and instant-grat is “Juju” from Dancehall vixen Dovey Magnum.

JCAL and VP Records presented the 2nd Annual Spirit Of The Caribbean Celebration on the front lawn of the Jamaica Performing Arts Center. The event is a collaboration with several Caribbean nations’ Consulates representatives sharing all aspects of their culture such as music, dance, poetry, art, food, and information specifically unique to their respective island nations.

Central Park SummerStage is New York’s largest free outdoor preforming arts festival and has quickly become a summer staple in the city. From iconic performers to the latest up-and-coming artists, SummerStage presents a bevvy of cross-genre concerts throughout the entirety of the summer. VP Records hosted an all-star showcase with some of its illustrious alumni at a 40th anniversary celebration at Central Park SummerStage this past August. The standing room only packed event included performances by Elephant Man, Grammy-winner Estelle, Junior Reid and Raging Fyah.

More than 300 people were treated to an exclusive concert for one of Jamaica’s most revered artists, Beres Hammond. The celebration of the Singer’s 64th birthday also served as a wrap party for the recent leg of his US tour, and a glamorous fete for a who’s who of the Miami music scene. The event was hosted by radio personality Pat McKay and featured a 10-piece Harmony House Band serenading their leader with re-interpretations of favorite Beres compositions. The outpouring of love and raw musical energy filled the intimate space with powerful reggae vibes. The energy was heightened even more when singer Romain Virgo stepped on stage to perform his renditions of Beres hits “Double Trouble,” “I Feel Good” and classic “One Step Ahead.” The highlight of the night came when the man himself greeted the crowd after the presentation of a three-tiered birthday cake and tribute from Chris Chin, CEO of VP Records. The singer performed a nearly 30-minute set of his hits.

The sound of Royal Soldier is unmistakably modern yet certain tracks evoke memories of legendary reggae stars of the 1970’s like Dennis, Bob, and Gregory. “All those spirits live in us,” says the singer, “because we grow up watching them.” 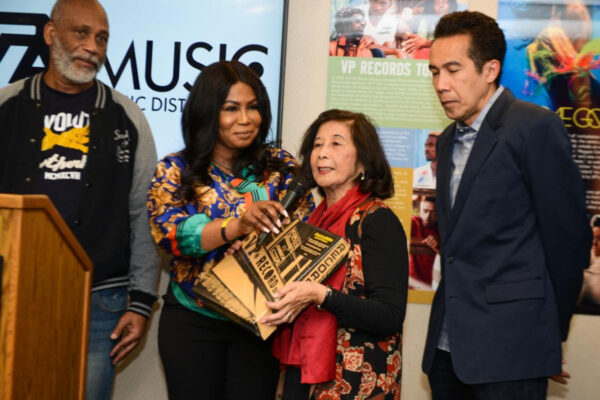 Romain Virgo and Christopher Martin at Strictly The Best Live 60

September 13- A Reggae Music Journey exhibition premiered at the Museum of Chinese in America (MOCA) in Chinatown, New York City

The label’s exhibit chronicled 60 years of reggae music history and the personal journey of Vincent and Patricia Chin and their children, who founded VP Records, 40 years ago when the family migrated to Queens, New York from Kingston, Jamaica. Incorporating album sleeves, 45 labels and a range of photography and text, the displays guided the viewer through the rise and development of Jamaican music over multiple decades.

The new album by Busy Signal features popular singles ‘Stay So’ (30+ million views on YouTube), ‘One Way’, ‘Dolla Van’ and ‘Got To Tell You’. The four tracks have amassed millions of social media impressions to date, weekly streams in the hundreds of thousands and active rotations on mix-show radio in the US, as well as massive street credibility. The album includes features from dancehall legend Bounty Killer on ‘Nuh Weh Nuh Safe,’ veteran deejay Josey Wales on the retro flavored ‘Bring Back The Vibes’ and breakthrough Afrobeats artist Afro B on “100%”.

The album launched after a successful week of New York and Boston promo including stops at Tidal, Billboard, YouTube, Power 105, On The Riddim, Jamn 94.5, Apple Beats 1 with Ebro which held the world premiere of his new single “100%” featuring Afro B and more. On Thursday October 3rd, he made history being the first reggae artist to do an album signing at the popular Green Acres Mall in Valley Stream New York, serving the Long Island and Queens areas.

Curated by DJ, writer, and VP Records Director of Catalog Development Carter Van Pelt, Down In Jamaica: 40 Years of VP Records is a 94-track, multi-format limited edition (2,000 run) box set with a 24-page booklet and art cards detailing the hits, the rarities, and the history of the world’s largest reggae label. Featuring 101 different artists, Down In Jamaica tells the story in detail through a chronological survey of the key records that helped define the company, from early singles on obscure sublabels (Roots From The Yard, Jah Guidance, and Love) to the well-known VP Records brand that brought Beenie Man, Sean Paul, Wayne Wonder, and others into the international mainstream.

The box set has received a great amount of mainstream press since its release. Most recently Rolling Stone stated it “Doubles as a history of modern Jamaican music … You can hear … the digitally-driven dancehall of the Eighties and Nineties that became as synonymous with VP as Sixties soul did with Motown.” Pitchfork stated its “a well-rounded portrait of the iconic imprint’s role in reggae history.” And it was the only music release featured in both the New York Times and Times of London’s 2019 holiday gift guides.

Running October 29th through to November 1st, the exhibition featured spotlights on Greensleeves Records — which VP acquired in 2008 — and reggae legend Dennis Brown. It also detailed the development of the label’s pioneering compilation series, Reggae Gold, Soca Gold and Strictly the Best.

Meanwhile, the panel discussions focused on the defining role of Caribbean music in the UK, its place in the streaming era, and tips on how to succeed as an upcoming artist. Earlier in the year, VP Records presented their exhibition in Brixton, Upstairs at the Ritzy.

VP Records web show, On The Riddim, filmed its last episode of season 1 at BRIC with a live studio audience. Guests included Richard Lue who spoke about Strictly The Best 60 Live as well as artists D Major, Romain Virgo and Richie Spice who was the first artist to be honored with a VP Icon title in person. Over 30,000 views collectively has been garnered since the shows launch in July. The season finale aired on December 24th on VP Records YouTube Channel.

The label produced another live show from BRIC in Brooklyn, New York at 7pm. This history making event was the first time ever that a broadcast has been done from New York and broadcasted back to Jamaica live on RETV and VP Records YouTube channel. Acts included Christopher Martin, Romain Virgo, Richie Spice, Noah Powa, Dovey Magnum, D Major, Red Fox, Naomi Cowan, The Danca family and more. The event was hosted by On The Riddim’s Kevin Crown and Queen Bremmer.

The annual Christmas Party was held on Friday December 13th at Jamaica Performing Arts Center in Jamaica Queens. Staff, guests, friends and family were treated to a buffet by Breezes Island Grill. The evening consisted of a year end recap from Vice President of Marketing, Aaron Talbert, music, in addition to prizes and raffle giveaways where a laptop, gift card and TV was awarded.