Spiritual Performs in Jamaica for the First Time this Saturday 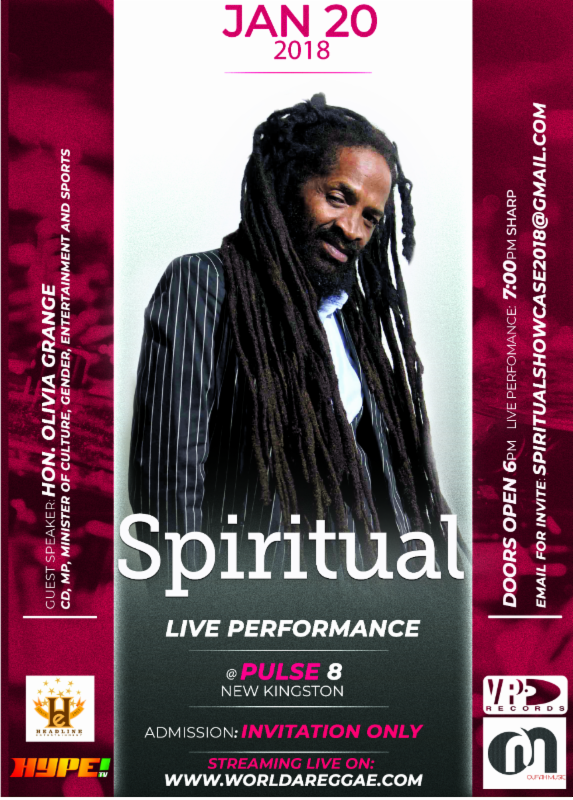 Reggae Singer Spiritual performs in Jamaica for the first time on Saturday, January 20 at Pulse 8. Though the event is by invitation only the artiste has granted access to the world via a live stream on worldareggae.com and invites locals to simply send an email to spiritualshowcase2018@gmail.com for their invitation to this special spiritual experience.

Worldareggae.com is one of the leading reggae websites in Europe with over 32k visitors per month and 400k Facebook followers. The stream is free to all and can be accessed from anywhere in the world.

The platform connects Reggae lovers worldwide and has granted Spiritual an introduction to music lovers through his album. Oufah Music, Oufah Music, Clifton “Specialist” Dillon’s production and management company, continues to make paradigm shifts in the music industry. is now working at the helm of reggae artist, Spiritual’s career producing his first full length studio album ‘Awakening’ released in 2017 on VP Records. So far the album’s leading singles ‘Time has Come’ and ‘Stand Up for Rasta’ have received favorable rotations worldwide and positive feedback.

The artiste who has a strong message of love in his music is looking forward to connecting with music lovers at his upcoming performance. “I’m a spiritual person, and I like songs with spiritual messages in them – songs about life and our place in it, and that make you think about what you’re doing,” he explains. “I write songs that are supposed to make people feel good about one another, and that can show you something positive about life.”

Errol Smith of Oufah Records anticipates a enthralling experience for patrons at the artiste performance and believes his introduction to Jamaica comes at a good time. “Nothing happens before the time and right now the “Time Has Come”. Spiritual is here to deliver the message of the father, to preach love unto his people and the time is now to Sought it out,” he explained.

In reviewing the outcome of this collaboration, veteran journalist, John Masouri summarizes that, “Spiritual’s music transports us to another time, when reggae legends like Bob Marley first took the rebel sound of Jamaica to a worldwide audience. Authenticity can be heard in every note…”. He went on to give credence to the quality album produced “Under Specialist’s direction, Spiritual has been able to realize his musical vision at last, and deliver an album that can stand alongside the seventies’ classics that inspired him as a youth. There are traces of Burning Spear and Culture in his voice, whilst the songs hark back to an era when artists were judged on their integrity, both musical and otherwise.”

Spiritual performs at Pulse 8 on Saturday, January 20 and can be viewed virtually at worldareggae.com.